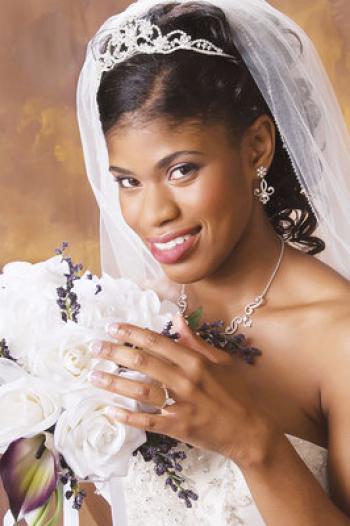 The sacrament of holy matrimony uniting Monica Danielle Bellard and Dr. Wees Jamar Love was performed at The Cathedral of St. John the Evangelist in Lafayette. Father Mark

Monica graduated with honors from Crowley High School in 2000. She earned a bachelor of science degree in biology from Southern University and A & M College in 2004. While at Southern University, she became a member of Alpha Kappa Alpha Sorority, Inc. Currently, Monica attends graduate school at the University of North Texas Health Science Center in Fort Worth, Texas. She will receive a master’s degree in Immunology this fall.

The groom is the son of Mr. and Mrs. Cornelius Love of Double Oak, Texas. He is the grandson of Vernon and Mattye Billups of Red Bird, Oklahoma and the late Curtis Evans and the late Lola and Matthew Love.

Wees is a 1995 graduate of Flower Mound Marcus High School in Flower Mound, Texas. In 1999 he earned a bachelor’s of arts degree in biochemistry while attending Austin College in Sherman, Texas; and also received a doctor of Philosophy degree in Microbiology and Immunology from the University of North Texas Health and Science Center in Fort Worth, Texas in 2008. Dr. Love is a posts–doctoral research associate in the Urology Department at the University of Florida in Gainesville, Florida.

The double ring ceremony reflected a page from a storybook wedding. Like a princess, the bride arrived at the church in a horse-drawn carriage wearing a beautiful fairy tale like gown of silk taffeta in a lovely hue of ivory. The strapless, Ginza Signature creation featured an elegant Swarovski crystal bodice with a sweetheart neckline and a parachute inspired pick-up skirt. The back of the skirt was adorned with embroidery and bustling which was carried throughout the cathedral-length train. Her head piece consisted of a ivory waist-length veil attached with a comb and accented with a pencil trim of crystal beading. Completing its design was a Swarovski crystal inspired tiara.

Upon arrival, Monica was escorted down the aisle on the arm of her father carrying a large mixed bouquet of lavender and Casablanca lilies. Nestled deep within the arrangement was a blue crystal rosary with accentuations of purple ribbon with pearl detailing. The rosary was a keepsake from her paternal grandmother, Maudry Bellard.

Scriptures were read by Stephanie Bellard-Garret and Henry Bellard, Jr., aunt and uncle of bride.

The attendants were stunning with each of them wearing a strapless, full-length duchess style gown of the Dessy Collection consisting of a frost colored top and a V-pleated bodice in a gorgeous tint of lavender. They each carried a hand-tied bouquet of lavender cali lilies accented with purple ribbon detailed with pearls.

Standing as best man was Cornelius Love, father of the groom. Groomsmen were Craig Hilburn and Brian Lashly, both friends of the groom; Richard Evans and Rishon Evans, cousins of the groom; and Lloyd “Trey” Jones, III, cousin of the bride.

As guests arrived they were ushered to seats by Ashlon Albert, Gaston Major and Calvin McKnight, friends of the bride; and Thaddeus Hollier, cousin of the bride.

Performing the duties of flower girl were Angel Allen, goddaughter of the bride; and Elantra Roussell, friend of the bride, while Nino Hollier, cousin of the bride; was ring bearer.

Atiyana Freddie, friend of the bride; served as the bible bearer and Je’kera Brock was the whisperer.

On her daughter’s special day the mother of the bride, the former Sandra Hollier, was radiant in a Victorian lilac chiffon V-neck dress. The asymmetrical ensemble featured a ruching affect and an embellishment of beading on the tank bodice with a matching scarf.

The mother of the groom, the former Jacquelyn Evans, was ravishing in her attire of choice. She wore a wisteria two-piece dress suit with a shimmer jacket. The jacket featured bolero elbow-length sleeves which covered a sleeveless V-neck dress with a back zipper. Complementing her look was a jeweled clip front closure on the jacket.

Both mothers were presented with corsages of lavender roses.

Following the exchanging of their vows, a reception was held at the Cajundome Convention Center.

The convention center was magnificently decorated in coordinating colors of lavender. Each table and chair was draped in white linens. Lavender toned bows were tied across the backs of each chair. Topping the tables were tall clear pilsner vases containing wisteria stem blooms and purple berry clusters place at their base, while an extravagant arrangement composed of cali lilies, baby’s breath and elegant peony sprays surrounded by hydrangea sprays and purple bud roses consumed their interior.

Adding a spectacular interest to the decor of the buffet table was a large floral arrangement of cali lilies and roses with green moss accessorized by bloomed wisteria with greenery, purple berries and full bloomed purple roses.

Among the many delicious refreshments served was the bride’s cake consisting of three asymmetrical tiers of white confection with pineapple filling. Each tier had an alternating design. Furthermore the cake was accentuated with a combination of lavender and purple flowers between each tier. Creating a magical aura was a uniquely shaped Cinderella carriage stand which cradled the cake.

In honor of the groom was a three layered, two-tiered delicacy of German chocolate enveloped in a icing created basket weave. Each tier was garnished with glazed pecans.

Out of town guests registered from Houston and Dallas, Texas; Oklahoma, California and various points in Louisiana to include Baton Rouge, New Orleans, Lake Charles, Lafayette and Eunice.

The newly-wedded couple will reside in Gainesville, Florida following the wedding.

On the evening of Friday, October 31, 2008 a rehearsal dinner was held at the Days Inn Meeting Room. Guests were treated to chicken and sausage gumbo, dinner rolls, potato salad and an assortment of beverages. The meal was hosted by the betrothed couple and the parents of the bride.