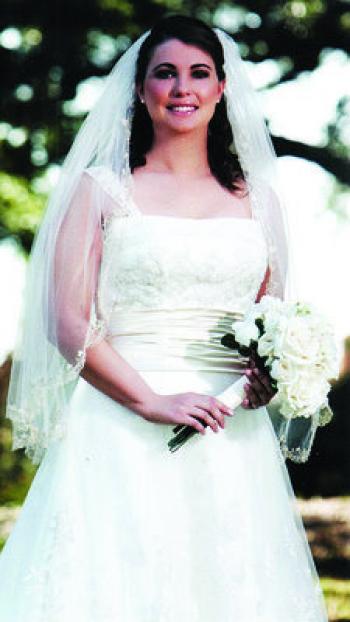 The bride is the daughter of John and Denise Trahan of Rayne. Her grandparents are Judge Denald and Claire Beslin of Rayne and the late Maxie and Marie Trahan of Crowley. She is a graduate of Notre Dame High School of Acadia Parish, attained a B.S. in biology from The University of Louisiana at Lafayette, and is presently a student at LSU School of Medicine in New Orleans.

The groom is the son of Greg and Diana Ronkartz of Mowata. His grandparents are Christina Hornsby of Branch, the late Everd Simon Hornsby, and Jerome and JoAnn Ronkartz of Mowata. He is a graduate of Notre Dame High School of Acadia Parish, The University of Louisiana at Lafayette, and is employed as a civil engineer with the Louisiana Department of Transportation and Development.

Scriptures were recited by Tammy Hornsby, godmother of the groom, and Aimee Coscarart and Julie Carson, friends of the bride.

Escorted by her father, the bride wore an A-lined, ivory wedding gown designed with a fitted bodice embellished with Swarovski crystals. The waist featured a pleated champagne satin sash atop an ivory satin skirt overlaid with delicate embridery and beaded appliques on soft tulle forming a chapel-length train. Her fingertip veil of ivory tulle was finished with a scalloped edging adorned with seeded pearls and soft gold embroidery. She carried a hand-tied bouquet of vendella roses, white lisianthus, white freesia and soft pink roses.

Of the traditional items selected by the bride for her wedding day was her paternal grandmother’s blue rosary and linen handkerchief, along with her wedding dress.

Attending the bride as maid of honor was Jennifer Beslin, bride’s first cousin. Lindsay Trahan, the bride’s sister-in-law was matron of honor.

Bridal attendants each wore an A-lined, knee-length dress of navy satin with chiffon overlay designed with a halter-style neckline, while carrying a hand-tied bouquet of pink titanic roses, green alstromerials and accents of ivory wax flowers.

Attending the groom as best man was Brantley Heston Yeager, friend of the groom.

Male attendants each wore a formal black tuxedo with a white shirt topped with black tie and vest. The lapel was noted with a small, ivory rose bud.

Immediately following the wedding ceremony, the newlyweds were honored during a reception held at Le Grand Hall, The Grand Opera House of the South in Crowley. The hall carried a traditional decor of antique green, light pink and ivory color tones including blooms of fresh hydrangea and roses.

Among the refreshments provided was the bride’s cake, a three-tier round confection frosted with ivory buttercream and filled with alternating Bavarian cream, butter pecan and amaretto. Set atop a silver plateau, the icing featured a whispy grooved design throughout and topped with fresh green hydrangea and soft pink roses. The cake was served by Glenda Danna Broussard, godmother of the bride.

For the groom’s table was a delicious bread pudding served by Tammy Hornsby, godmother of the groom.

In addition to guests attending the wedding from numerous points of Louisiana, family members and friends registered from Houston, Texas, Washington, D.C. and Ocean Springs, Miss.

Following a wedding trip to Key West, Fla, the couple is residing in Metairie.

Prior to the wedding, a rehearsal dinner was held Wednesday, June 15, at the Ronkartz Camp hosted by the groom’s parents.