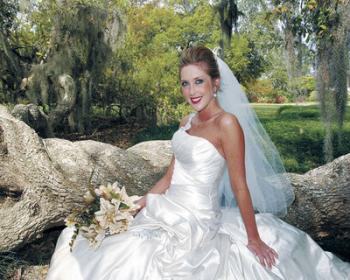 The Assumption of the Blessed Virgin Mary Catholic Church in Mire was the setting on Friday, June 25, 2010 for the Nuptial Mass uniting Mackenzie Lynn Lormand of Rayne and Ryan Paul Hebert of New Orleans in marriage. The 6:30 p.m. evening ceremony was celebrated by Msgr. Russell Harrington, pastor.

The groom is the son of Mr. and Mrs. Fernest Hebert of Crowley. His grandparents are Mr. and Mrs. Sherman Smith, Sr. of Little Cheniere, Mrs. Gladys Hebert Hogue of Kalan, and the late Lamar Hogue. He is a 2005 graduate of Notre Dame High School, 2009 graduate of UL-Lafayette with a Bachelor degree in biology, and is currently attending LSU School of Dentistry in New Orleans.

Guests were ushered to their seats for the ceremony by Derrick Guillory, cousin of the bride, and Zach Meche, friend of the groom.

Scriptures were recited by Yvette Petitjean, cousin of the bride, and Sharon Smith, aunt of the groom.

Gifts were offered during the Nuptial Mass by Sylvia Peltier, godmother of the bride, and Sherman Smith, Jr., godfather of the groom.

Escorted by her father, the bride wore a Maggie Sottero Fiorella A-lined wedding gown with zipper over inner corset and a button-loop accent. The soft, shimmer, satin gown was lavishly caught-up at various points in the skirt and featured rich beaded embellishments with Swarvoski crystals. Alternating diagonal pleats accented the bodice and fitted hip area which created a sensational figure. The intrigue of the style was enhanced with a one-shoulder beaded shoulder strap. A fresh-water pearl and ostrich feather hair-piece held a fingertip ivory veil, while she carried a gathered bridal bouquet of ivory roses and orchids accented with ostrich feathers and pearls.

Attending the bride as matron of honor was her cousin, Jordan Peltier Barousse.

Junior bridesmaid was Joscyln Marceaux, godchild of the groom.

Bridal attendants each wore a berry-colored, strapless dress with a bubble hemline designed in a luxurious flat taffeta. Each carried a rose mix bouquet in tones of burgundy, ivory and mauve.

Serving as flower girl was Andie Toups, godchild of the bride. She wore an ivory, floor-length mini wedding dress.

Attending the groom as best man was a friend, P.J. Boulet.

Groomsmen were Dylan Lormand, brother of the bride; Matt Baronet, Drew Puissegur, Trenton Leonards, Adam Credeur and Jon Angelle, friends of the groom; and Josh Smith, cousin of the groom.

Male attendants each wore a formal black “After Six” tuxedo with ivory shirt and berry-colored vest and bow tie, along with a red rose boutonniere.

Ring bearer was Brayden Smith, cousin of the groom. He was attired identically to the groom.

For her daughter’s wedding, the mother of the bride wore a floor-length dress by Impressions in a copper tone featuring a ruching on the bodice and topped with a copper bolero jacket. She was presented a corsage of deep red rose mix.

The groom’s mother selected a light lavender, floor-length dress featuring a scooped neckline and ruffles throughout. She was also presented a deep red rose mix corsage.

Immediately following the wedding ceremony, the newlyweds were honored during a reception held at Le Grand Hall in Crowley.

Among the refreshments provided for the guests in attendance was the bride’s cake, a four-tier round confection of white fondant featuring edible fleur de lies iron work and topped with an “H.” The cake was served by the bride’s godmother, Sylvia Peltier.

The groom’s cake was a two-tier confection of traditional chocolate featuring a UL-Lafayette logo and topped with chocolate-covered strawberries. The cake was served by the groom’s aunt, Sharon Smith.

In addition to guests in attendance from the Acadiana area, family members and friends attended from Baton Rouge, New Orleans, Monroe, Shreveport, Texas and California.

Following their wedding trip to Riveria Maya, Mexico, the couple will reside in New Orleans.

Prior to the wedding on Thursday, June 24, the home of Audie Hanks in Crowley formed the setting for the rehearsal dinner. The groom’s parents hosted the pre-nuptial event as guests were served rib eye steaks and sides.