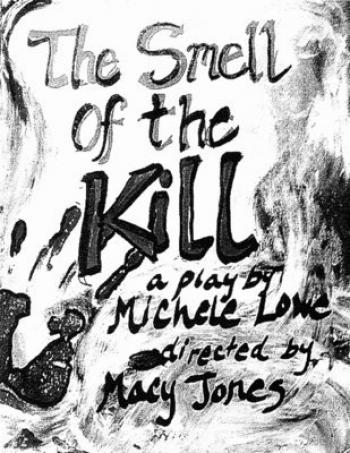 By: Angela Becnel - Staff Writer
CROWLEY - Lauren Elizabeth Stefanski recently performed the role of Molly in the Michele Lowe comedy, “The Smell of the Kill.” She also produced the original artwork for the promotional poster and program for the play.

She graduated from Notre Dame and is currently a junior at LSU with a double major in mass communications and theater as well as a member of the Kappa Delta social sorority.

“The Smell of the Kill,” directed by Macy Jones, was a live performance at the Studio Theatre located in the Music and Dramatic Arts Building at LSU campus in Baton Rouge.

The production was about three 21st century wives stuck in feminist marriages. Each husband was lacking in some way and was keeping his wife trapped with his abhorrent behavior patterns.

The end of the action packed production left the women with a decision to make, should they continue on the path they were following or diverge from what they had previously accepted?

The dark comedy provided laughs for the many audiences who saw the play.

Lauren drew the original artwork for her own collection when it was unexpectedly chosen for the promotional poster and program for the production.

“The director saw it and wanted to use it for her production,” said Peggy. “Lauren was happy about that, and then she was thrilled to also get the role as Molly. Our hope for her is that she is able continue with more roles in theater in her future.”

As a college student, Lauren is trying to decide if theater is what she wants to pursue as a career.

“We produce two major shows per semester,” said Lauren. “ I am currently looking for monologues for general auditions in February with the LSU theater department for the entire upcoming semester.

In addition to theater, Lauren loves playing tennis and painting and has been playing the guitar for three years.

“I love to play Bob Dylan, the Beatles, the blues, oldies, indie and alternative music,” said Lauren. In terms of her establishing herself with a career in theater, she leans toward affirmative hope.

“It is not like work to me,” she said. “ I want to love what I do as a career, to find meaning behind my work. I hope to find success in theater.”