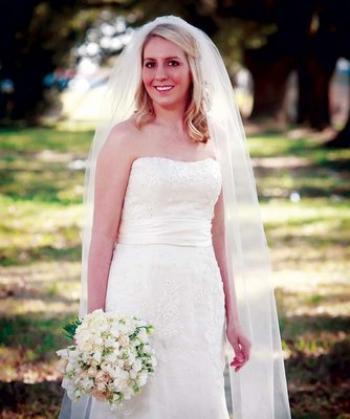 During a beautiful spring afternoon nuptial Mass on Saturday, April 10, 2010, Miss Claire Elizabeth Leonards and Mr. Son Cao Hoang exchanged their marriage vows. The ceremony was held at St. Michael the Archangel Catholic Church in Crowley at 1:30 p.m. The Reverend Monsignor Keith Derouen, a long time family friend and pastor at Cathedral of St. John the Evangelist in Lafayette, officiated and was celebrant of the nuptial Mass. The Reverend James Brady, Associate Pastor of St. Michael the Archangel Church, served as con-celebrant.

A program of traditional nuptial music enhanced the beauty of the ceremony provided by Jodi Bollich and Raymond Hebert, vocalists, Alberta Lyons, organist, Tommy Benoit, violinist, along with Jude Gaspard and Mike Ritter, trumpeters. The beautifully arranged selections included, Edelweiss and Schubert’s Ave Maria that accompanied the seating of the grandmothers and mothers. La Grace by Telemann heralded the entrance of the honorary bridesmaids, while the bridesmaids processed to Pachelbel’s Canon in D. The nuptial Mass included Parkinson’s Ave Maria, Panis Angelicus and Maria Zu Lieben by Frank, and On this Day by Lambillotte. The bride and groom led the recessional from the church to the beautiful Westminster.

The vintage stained glass windows of the church allowed the elegance of natural light to form a perfect setting for the ceremony. The gracious placement of dupioni silk ribbon-tied wedding flowers accented the pews down the main aisle of the church culminated in a single, elegant arrangement of antique blush hydrangeas, spray roses, hypericum berries, and vibernum centered in the sanctuary. Special flowers from the bride’s collection highlighted by peonies were placed at the altar of Our Lady. As the bride left the sanctuary, she first visited the altar of Our Lady escorted by her groom. The couple then presented bouquets to their mothers similarly highlighted by ivory peonies.

To the strains of Trumpet Voluntary, the bride entered the church on the arm of her father, radiant in her wedding gown of ivory silk organza from Priscilla of Boston designed by Melissa Sweet. The strapless slim silhouette flowed to a slightly flared skirt and featured a hint of a sweetheart neckline. It was softly embellished with delicate ribbon and threads embroidery, hand cut silk crepe de chine in artful appliqués in semblance of dogwood flowers. Sprinklings of Swarovski crystals added delicate detailing to the handwork. An ivory silk charmeuse sash first tied at the natural waist, and then draped the back of the dress. Its soft bow and silk covered buttons completed the design, which swept into a graceful train. Her single tiered veil of tulle flowed simply in cathedral length with her gown. The bride carried a European free-formed nosegay of peonies, hydrangea, sweet peas, roses, viburnum and hypericum berries, all in hues of ivory and foliage. The bridal bouquet featured ivory satin half wrapped stems with French knotting. The bride wore at her wrist a petite sterling silver locket laced with a pale blue velvet ribbon bracelet in memory of her “Oma” and her dear first cousin William Moody Hensgens with whom she grew up. She also carried a crystal rosary given to her by her maternal grandparents. Her pearl earrings were from her mother and the traditional sixpence was a keepsake from her paternal grandmother.

Preceding the bride in the processional were her six sisters who served as her bridesmaids. Miss Anne Theresa Leonards, wearing a quartz shaded silk formal gown of duchess satin designed with a natural waist and a ruffle that gracefully draped a single shoulder, served as maid of honor. She carried a European free-formed nosegay of antique hydrangeas in shades of blush with tinges of soft green, spray roses and hypericum berries with half wrapped stems in pistachio satin ribbon. A halo of wax flowers completed the maids’ attire. Dressed identically were Misses Mary Grace Leonards, Ellen Charlotte Leonards, and Jane Margaret Leonards, who honored their sister as bridesmaids. Misses Sarah Catherine Leonards and Audrey Elizabeth Leonards served their sister as junior bridesmaids and were attired in full length dresses of quartz duchess satin that featured a natural waist with a delicate shoulder ruffle draping each shoulder. Their bouquets were small nosegays of the bridal flowers.

Little Miss Rosemary Moody Gielen, cousin of the bride, was happily the flower girl. Miss Gielen wore a hand embroidered white Swiss batiste tea length dress laced with ribbons of ivory satin that had been worn by the bride for her First Communion. She carried a free form petite nosegay of the bridal flowers and wore a halo of wax flowers.

Master Austin Lloyd Lacombe, nephew of the groom, was the ring bearer. He wore a blue seersucker suit. The gentlemen of the wedding party wore navy blue suits and were designated by boutonnières of wedding flowers including viburnum, roses and hypericum berries.

For her daughter’s wedding, Mrs. Leonards entered the church escorted by her sons Bryan and Nicholas Leonards in a classic formal design of silver blue silk. The long sheath dress was strapless with side gathers in the bodice and the illusion of soft skirting. A bolero style jacket with three quarter length sleeves ruched at the cuff completed her ensemble. The bride chose for her mother a wristlet centered with a small ivory peony.

The mother of the groom, escorted by her eldest son Loc Hoang, chose a lovely two-pieced ensemble of sea foam green in formal suiting. A wristlet centered with a small ivory peony complimented her wedding attire.

Following the nuptial Mass, the wedding party led by the new Mr. and Mrs. Hoang made their way to Le Grand Hall in the carefully restored Grand Opera House of the South, the latter originally built in 1901, on Parkerson Avenue in Crowley. Le Grand Hall opened its doors for the first time for the couple’s reception. Entrance to the reception was through the main doors marked by topiaries greened by spring. Guests were received into a delightful garden setting with floras from the wedding flowers in antiqued ivory glazed cachepots in various heights designating the service tables and the round tops that provided seating for the wedding fare. Additional tables provided conversational areas for the guests with dessert service centered by a beautiful four tiered wedding cake of delicate ivory butter cream decorated simply with iced French ribbon trim and cascading fresh flowers again from the bride’s selections. Topping the cake was a pair of original sweetheart birds designed by artist Ann Wood. The miniature birds were hand sewn in satin, embroidered and embellished in vintage lace and tulle for the bride and seersucker suiting for the groom, all in keeping with the seasonal garden theme of the wedding. Sterling silver antique goblets that were a wedding gift to the late Mr. and Mrs. Braxton I. Moody, Sr., since having been used for toasting at family weddings, were raised by the newly weds in celebration with the wedding salutations of the day.

The newly wed Mr. and Mrs. Hoang led the dancing with their first dance to the now classic lyrics of Can’t Help Falling in Love. Guests enjoyed the festive sounds of the brass band The Tip Tops, hailing from Mobile, Alabama, reminiscent of the days when music filled the rafters of the Grand’s historic halls. With the afternoon waning, the bride and groom left for a wedding trip to the Rivera Maya, grateful to their parents for the memorable day. As guests departed, each received small monogrammed burlap bags of fragrant Jasmine rice tied with recipe cards of family rice favorites from both the bride’s and the groom’s family files.