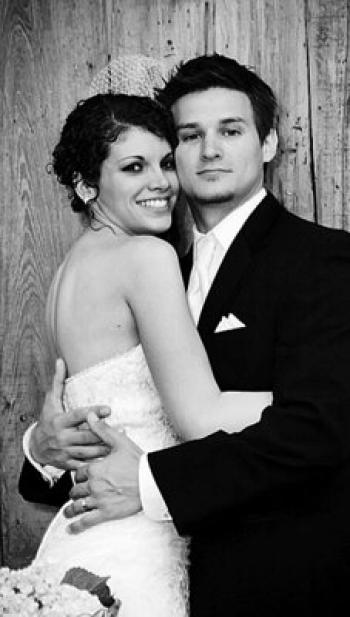 The bride is the daughter of Kevin and Sharon Meche of Rayne. Her grandparents are Mr. and Mrs. Tyson Foreman of Rayne, Joyce Meche of Rayne and the late Delton Meche. She is a graduate of Acadiana High School in Scott and employed by Best Buy in Lafayette.

The groom is the son of Pam and André Landaiche of Rayne, and Angela and Robert Dale Melancon, II of Crowley. He is a graduate of Notre Dame High School and is employed by US Med Equip in Scott.

Scriptures were recited by Samantha Alleman and Erin Collins.

Escorted by her father, the bride wore a strapless, vintage-style Oleg Cassini wedding gown designed in ivory and champagne leaded lace and pleated tiers of tulle against a slim silhouette completed with a chapel-length train. Her headpiece was a stylish birdcage veil and her bouquet was designed with dark violet calla lilies and sprays of peacock feathers.

Attending the bride as maid of honor was the groom’s sister, Nicole Melancon.

Bridesmaids were Samantha Meche, sister of the bride, and Quincy Emmons, Mallory Emmons, Arin Meche and Mallori Jeansonne, friends of the bride.

Bridal attendants each wore a sleeveless cocktail dress in a navy tone featuring an high neckline and keyhole cutout with beading to the ruched empire waist. Each carried a bouquet of white calla lilies with sprays of peacock feather sprays.

Serving as flower girl was Emma Landaiche, little sister of the groom. She wore a knee-length, three-tier dress of navy chiffon designed with a sequin neckline while carrying a basket of white calla lilies and peacock feather sprays.

Attending the groom as best man was his uncle, Jeff Alleman.

Junior groomsman was Boyd Gray, godchild of the bride.

Serving as ring bearers were Caleb Melancon, nephew of the groom, and Nicholas Landaiche, little brother of the groom.

For her daughter’s wedding, the mother of the bride, Sharon Foreman Meche wore a short-sleeve, beaded lace dress in a gunmetal tone featuring a V-neckline, scalloped edging and overlapping tiers on a straight skirt.

Immediately following the wedding ceremony, the newlyweds were honored during a reception held at Fezzo’s III in Scott.

Among the refreshments provided for guests was the bride’s cake, a four-tier round confection of white buttercream with alternating decorations of silver pearls and white scrolling. The front was embellished with a navy blue initial “M” and topped with enlarged wedding rings. The cake was served by Lori Emmons, friend of the couple.

The groom’s cake was a “Dixieland Jazz” confection served by Denise McIntyre, friend of the couple.

Following a wedding trip to St. Thomas in the U.S. Virgin Islands, the couple will reside in Rayne.

Prior to the wedding, a rehearsal dinner was held Friday, Sept. 9, 2011 at Fezzo’s III in Scott. The 7 p.m. social was hosted by Pam and André Landaiche.