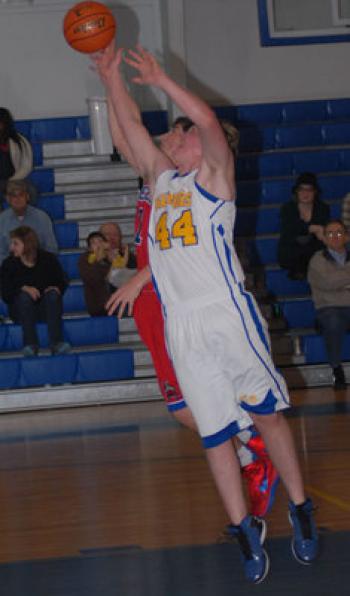 CROWLEY – The Northside Christian Warriors have been a second-half team for the majority of the 2012-13 prep basketball season and Thursday’s  home contest against Johnson Bayou was no different.

The Warriors (14-10, 5-0) rallied from an eight-point halftime deficit by scoring 47 points in the second half to walk away with a 68-53 victory over the visiting Tigers.

The victory clinched the District 7-C title for the Warriors, who have one league game remaining on Tuesday. Last year, Northside claimed a share of the league title along with Hackberry.

“Winning the district title is a big deal for us,” said NCS coach Glenn Daigle. “Last year we shared it with Hackberry and the kids really wanted to come out this year and win it outright.”

Thursday, the  Warriors’ second-half defense was the difference, said Daigle, whose team trailed 29-21 at the break.

“Our defense really made a stand in the second half and that allowed our offense to start clicking,” he said.

The Warriors recorded countless steals in the third quarter and out rebounded the Rebels at will early in the frame as they went on a 13-0 run in the first three minutes.

Johnson Bayou weathered the storm, though, to hold on to a 44-39 advantage.

Johnson Bayou’s Richard Kiffe scored nine of his 16 points in the third quarter.

“The Kiffe kid is really good and he can shoot,” said Daigle. “But they had two other kids that stepped up really big and that made it tough.”

Blake Badon also had a big night for the Rebels. He drilled four 3-pointers on the night, three in the second quarter, and finished with a game-high 22 points.

Kiffe and Badon combined for seven points early in the fourth quarter before being benched after both received their fifth foul.

That opened the gate for the Warriors.

“The big thing in the fourth, again, was our defense,” said Daigle, whose squad drew six charges on the night. “Nick Zaunbrecher drew five charges and then we got the charge call on Kiffe to take him out of the game and that changed everything.

“We hadn’t really pressed them much because he (Kiffe) is such a good ball handler and he can break a press by himself. With him out, we were able to implement the press and that’s when we are at our best.”

Kade Miller thrived in Daigle’s pressure defense and scored 12 of his 20 points, mostly in transition, in the fourth quarter.

Joseph Trahan also had a big fourth quarter; he poured in nine of his 12 points in the final frame. He also pulled down eight rebounds and had four steals.

“Whenever we are pressing, I know Kade is going to get up and down in the open court and get those points,” said Daigle. “Same thing with Joseph. He’s going to give me that hustle. He just adds that extra intensity to the game.”

Nathan Zeller also hit double figures on the night with 15 points to go along with seven rebounds.

Zaunbrecher finished with nine points but he was equally as impressive on the boards with 10 rebounds.

“Nick knows what his role is,” said Daigle. “He knows his job is to get those rebounds, get those trash points and draw those charges. I can depend on him for that almost every night.”

Securing the league title, however, isn’t the final piece of the puzzle for Daigle and his Warriors. Now the goal is to finish district play unblemished, something that hasn’t been done in some time in 7-C play.

“It has been said all through the season that no one will go undefeated in our district and that just adds a little fuel to the fire for our guys,” said Daigle. “That made our boys play even harder but we have to remain focused because we have one game left.”

The Warriors will entertain Starks Tuesday at 7 p.m.

CROWLEY – With three starters on the bench after fouling out and the game tied at 31-31 at the end of regulation, things looked bleak for the Northside Christian Lady Warriors.

But a 3-pointer by Brooke Stanford to start the extra frame and some clutch free throw shooting down the stretch allowed the Lady Warriors to slip away with a 41-37 overtime victory over Johnson Bayou.

“We had three girls out going into overtime, but my bench really stepped up and I’m really proud of them,” said NCS coach Tracie Clement. “When we hit that 3-pointer in overtime, that gave us the momentum and helped us seal the win.”

Johnson Bayou also had three starters foul out prior to the overtime and trailed by three late in regulation before tying the game on a free throw from Haleigh Jinks.

“It was a very physical game,” said Clement. “We both had key people on the sideline in overtime. We both had a lot of girls that didn’t have a lot of experience in the game there at the end. But we had a gameplan and we stuck to it.”

Stanford’s 3-pointer in overtime gave the Lady Warriors a 34-31 edge with 3:09 remaining. Madi Clement then drove the lane for a layup to increase the lead to five.

The Lady Rebels answered right back, however, when Jinks canned a 3-pointer of her own to cut the deficit to two (36-34).

From there, the Lady Rebels went cold from the floor and the Lady Warriors connected on five free throws in the final two minutes to seal the victory.

“We never really could pull away,” said Clement. “When they cut the lead to two, we pulled it out and made them foul us. Fortunately, we were able to hit our free throws.”

The Lady Warriors went 5-for-8 from the free throw line in overtime, but they missed opportunity after opportunity from the stripe in the fourth quarter when they were 0-for-7 on their freebie attempts.

Overall, Northside went 7-for-18 from the charity stripe. Johnson Bayou didn’t fare much better - they went 11-for-24 on the night.

The Lady Warriors were led by Natalie Hayes with 13 points and seven rebounds while Clement and Stanford each pitched in 11. Clement also had 12 rebounds.

Keylee Young paced the Lady Rebels with 13 points. She was followed by Haleigh Jinks and Gracie Young with six points each while Madison Jinks and Allison Romero each had five. Daria Jinks rounded out the scoring with two points.