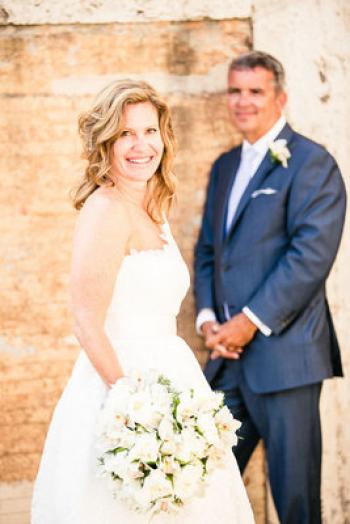 KNOXVILLE, TN – Lia Ann Sheucraft of Knoxville, Tennessee, formerly of Nashville and John Mark Broussard, also of Knoxville, formerly of Church Point were united in the sacrament of holy matrimony on Tuesday, June 12, 2012 at a Nuptial Mass celebrated at eleven o’clock in the morning in the Chapel of the Choir inside St. Peter’s Basilica, Vatican City.

The bride is the daughter of Mr. and Mrs. Dean Sheucraft of Nashville. Her grandparents are Mrs. Ruth Monday and the late Earl Monday of Portland, Tennessee, and the late Mr. and Mrs. Tom Sheucraft, also of Portland, Tennessee. The bride is a graduate of Western Kentucky University and holds a Master’s Degree in business administration from the University of Tennessee at Knoxville. She is employed as a Senior Specialty Representative with Merck and Co.

The groom is the son of Mr. and Mrs. Carroll Jacobs (née Julia Inez Daigle) of Knoxville, Tennessee, formerly of Church Point, and the late John Camille Broussard. His grandparents are the late Mr. and Mrs. Theodore Roosevelt Daigle (née Genevieve Horecky) of Church Point and the late Mr. and Mrs. Jean Camille Broussard (née Ada Hebert) of Maurice. He holds a Bachelor of Science degree with Honors in Business Administration from the University of Tennessee at Knoxville and is a Tennessee Certified General Appraiser with Advanced Appraisal Services in Knoxville.

Escorted by her father, the bride wore an ivory, re-embroidered lace Ramona Keveza dress highlighted by an asymmetrical lace neckline with a fitted bodice accented at the waist with a satin belt, and a knee-length full skirt featuring an illusion cut-out hemline. During the ceremony, the bride’s shoulders were covered with a short detachable shawl made of ivory satin.

She held a hand-tied bouquet of white peonies and orchids with tufts of greenery for accents. The stems were wrapped in ivory satin and hand-tied with ivory lace.

For her daughter’s wedding, the mother of the bride wore a fashionable rose-colored knee-length silk dress with a light floral cardigan to match. The groom’s mother wore a beige two-piece suit featuring a knee-length skirt and a matching fitted jacket with a notched embroidered collar accented with crystal beading.

Scripture readings for the Mass were recited by Grant Bowman of Knoxville, Tennessee, friend of the bride and groom, and Kristi Hughes of Glen Ellyn, Illinois, cousin of the bride.

Following the wedding ceremony, the couple honored their guests with an elegant luncheon at Ristorante Imàgo atop Hotel Hassler, overlooking the Spanish Steps. The Michelin-starred rooftop restaurant offered panoramic views of Rome and Vatican City. While the guests awaited the arrival of the couple, apertifs, including a selection of wines and hot and cold canapés, were served. The exquisite six-course meal featured red shrimp with citrus fruit served with potato and bean salad, asparagus and burrata cheese ravioli with parsley sauce, paccheri pasta from Gragnano with scorpion fish ragù and black olives, grated herb veal loin with black truffle sauce and fresh fruit with mixed sorbet.

Following the meal, wedding cake was served for dessert. The chantilly cream confection was adorned with white peonies and trimmed with white silk ribbon. The three-tiered creation was a delicacy of white sponge cake, strawberries, and chocolate filling.

On Wednesday morning, the newlyweds and several guests attended the weekly audience with His Holiness, Pope Benedict XVI in Vatican City, and received thePapal Blessing.

After several days in Rome prior to and following the wedding, the couple continued on an extended honeymoon trip to Florence, Venice, and Paris. The couple is now at home in Knoxville.