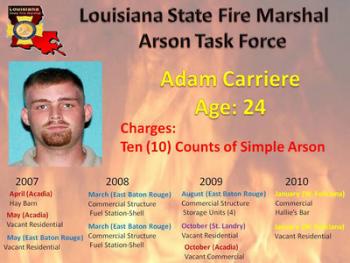 The extent of the charges, ranging from April 2007 to January 2010, were announced Thursday, Jan. 28, during a joint news conference by State Police Colonel Mike Edmonson and State Fire Marshal H. “Butch” Browning in Baton Rouge.

The former Church Point resident was labeled a serial arsonist.

A timeline of Carriere’s offenses was issued during the news conference, as follows:

Acadia - April 17 –– Hay barn (400 St. Theresa Rd. Richard), set with available combustibles. Carriere had applied to join the Richard VFD but was not accepted at time of fire.

Carriere had applied to join the Richard VFD but was not accepted at time of thee two fires.

Carriere applied as a volunteer firefighters with the Brownsfield VFD but was not accepted.

Carriere applied for Fire District 6, but was not accepted at the time of these fires in a Shell fuel station.

Carriere was a probational firefighter with the Church Point VFD at time of these fires.

Carriere was a probational firefighter for only three days with the West Feliciana Parish Fire District No. 1 before these two fires.

Carriere is currently incarcerated in the West Feliciana Parish Jail under a $150,000 bond. Arrests warrants are also filed in the parishes of Acadia, St. Landry and East Baton Rouge.