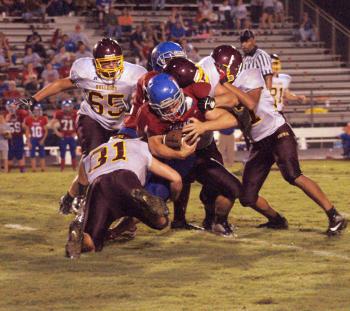 The loss dropped Iota to 0-3 on the season, while Lake Arthur moved to 3-0.
The Bulldogs will host Welsh (2-1) Thursday night in Bulldog Stadium.

LAKE ARTHUR
“We were there; we just couldn’t make the plays in the end." - Coach Neal Legé

The effort was there, so too was the run game and defense.

It was almost enough.

But instead of taking home its first win of the season, the Iota Bulldogs lost a heartbreaker to Lake Arthur, 16-14 Friday night in Jack Doland Stadium. The win propelled the Tigers to 3-0 and dropped the Bulldogs to 0-3.

“It never fails, we have that one play that kills us,” said Iota Bulldogs coach Neal Legé. “The overall effort was great. I thought we played hard for four quarters.

“We were there; we just couldn’t make the plays in the end. I thought defensively we played well all night. We just zoned out when we had to make the big plays.”

It was a game of two halves. The first half was even. The Bulldogs and Tigers traded punts and possessions. Until 8:50 remaining in the second quarter.

Lake Arthur lined up for a punt at the Iota 41-yard line. A bad snap though gave the Bulldogs the ball at the Tigers 35-yard line. It was prime field position and the Bulldogs’ offense would capitalize. Six plays later, Michael Thevis punched it in from 5 yards out with 5:46 remaining.

After Tristan Fontenot’s kick went through the uprights, the Bulldogs were sitting on a 7-0 lead.

While the story for Lake Arthur would eventually become overcoming turnovers – four fumbles and an interception, the story in the first half was missed opportunities for the Tigers to tie the game. That storyline would transition over to Iota in the second half.

Case in point, when Iota had a chance to add to its lead, the Bulldogs threw an interception, deep in its own territory. But Samuel Reed helped Iota returned the favor the next play with a one-handed interception at the Bulldogs 13-yard line, helping the Bulldogs “dodge a bullet” as Legé said.

It helped protect the lead and for the first time all season, Iota would have to hold off its opponent in the second half.

But the game was indeed a game of two halves and the Bulldogs’ late in the first half woke up the Tigers came out firing all on cylinders in the second half, taking its opening second half drive down the field for a touchdown.

A seven play, 65-yard drive was capped off by a 35 yard touchdown pass from quarterback Glen Guidry to wide receiver James Zeno. The Tigers had Damien Robinson run for a two-point conversion and give the Tigers the 8-7 lead.

For Iota, it would be the beginning of the end. While on offense, Lake Arthur’s star running back Trey Hargrave seemed to hit another gear and carry the ball more, rushing for 56 of his 94 yards in the second half.

Still, however, the Tigers had a hard time converting possessions and ball movement into points thanks to the turnovers, something Iota could not fully capitalize on this game.

“We just weren’t taking advantage of what they gave us,” said Legé. “We had the opportunities to do it (win), we just didn’t.

But, the second Bulldogs touchdown did come off of a Lake Arthur turnover. When the Tigers fumbled at its own 23-yard line, Iota looked to immediately score and did so. A 23-yard strike from Timothy Lunson to Fontenot as well as Fontenot’s kick gave the Bulldogs a 14-8 lead.

The lead did not last as Lake Arthur’s Dion Cantrelle received the kickoff at the Tigers’ 18-yard line and took it 82 yards back for the touchdown. Now tied at 14, the Tigers relied on Hargrave for the two point lead via a conversion and got it. With three minutes remaining, Iota was facing a two point deficit just as quickly as it had taken a six point lead.

That’s where the points ended.

Several missed opportunities will be the focuses for the next week, but for Iota, the chances to snatch victory away from the Tigers, who struggle all night, was there for the taking, even in the end.

Iota’s leading rushers for the evening were Nick Sloane with eight carries for 61 yards, Kenny Guillory (11-49), Thevis (7-21 and a touchdown) and Prejean (3-12). In the air, Lunson finished 4-10 with 46 yards, a touchdown and two interceptions and Fontenot with one touchdown reception for 23 yards and Kyle Smith (3-23).

On the winning side, Hargrave led the offense with 26 carries for 94 yards. Adding to the statistics were Cantrelle (1-52 on the ground, 2-8 in the air), Michael Ware (8-22) and Zeno with his 35-yard touchdown reception.

The Bulldogs will look for continued improvement and their first victory on a short week. Iota will host Welsh Thursday night at 7 p.m.