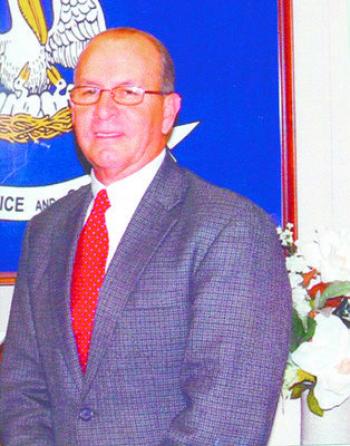 By: Howell Dennis
CROWLEY - It’s been nearly eight months since the Post-Signal last checked in on the recovery of Dewith Carrier, who has been the owner of Teacher’s Pet in Crowley as well as several other locations.

For those who don’t recall, on September 28, 2010, Carrier and his wife, Kathy were watching television when the peace of their Oberlin neighborhood was shattered by the sound of a gunshot.

“It was dark and I went outside to check it out,” said Carrier. “I saw the light come on in a car in my neighbor’s driveway. I saw a man come out and put a shotgun in the back of his car.”

Not knowing the person or the danger he was facing, Carrier shouted ‘Hey!’ towards the man.

Unknowingly, his life was about to change forever.

“After I shouted at him he pulled a shotgun out of the car and pointed it at me,” said Carrier. “I turned to run toward the house but he shot me in the back. He fired two more shots that hit my house and car.”

The incident occurred within full view of his wife.

Unbeknownst to Carrier, the man he had shouted at was the ex-husband of one of his employees, Carliss Dunn who lived across the street from him. He had just murdered his ex-wife and was leaving the scene when Carrier confronted him. After shooting Carrier the killer, George Dunn, shot himself in the head, committing suicide.

Carrier said that ‘I felt the blood running out of me and I made peace with God, his wife and his son Kyle.’

“I didn’t think I would make it through the night,” he said.

After being transported to Allen Parish Hospital in Kinder where he was immediately given five pints of blood, it was discovered that he had eight pellet wounds in his back.

In February, he had surgery performed to fix the paralysis but it was unsuccessful. The scar tissue that had formed around his wounds was too heavy.

However, anyone thinking that Carrier wouldn’t go on with his life the way it had been prior to the shooting was mistaken.

After he had regained enough of his strength, he started to pay visits to his stores while he was still undergoing his rehabilitation. When last interviewed by the Post Signal, Carrier was in a wheelchair. When he visited the store on Wednesday this week, he was walking with the use of a cane.

“It’s truly remarkable,” said Melissa Guidry, manager of Teacher’s Pet’s Crowley location. “When we find out he’s coming to visit we get so excited. He told us he had recently bought a three wheel bicycle”

“I think without Dewith’s determination and positive attitude he wouldn’t have made it through this,” said Teacher’s Pet employee Jason Guillory.

“We all think he’s a great boss and an even greater person,” said fellow employee Gwen Marceaux. “He inspires us every time he walks through that door.”

One thing Carrier has become involved in is the issue of domestic violence and he and Kathy attend meetings regularly.

“Kathy and I didn’t just lose an employee that night we lost a good friend...she was loved by everyone,” said Carrier. “We really didn’t know how bad domestic violence was until that night.”

Though Carrier’s legs are numb and ‘always will be’, he shows up regulary at his stores.

“One of his favorite things is when a customer he knows comes in,” smiled Guidry. “He gets so excited talking to them that it inspires us.”

“He really a great man,” she added.