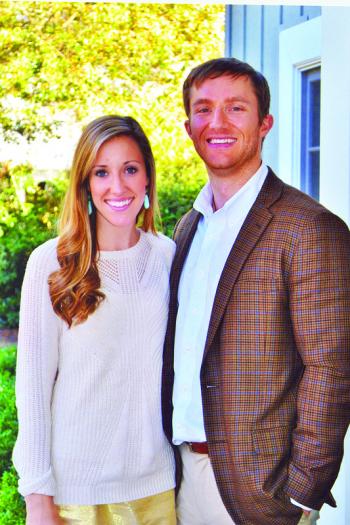 The wedding will be solemnized with a Nuptial Mass celebrated by Fr. Bryce Sibley, pastor of Our Lady of Wisdom Catholic Church in Lafayette, on Saturday, May 9, at 6:30 p.m. at St. Peter Catholic Church in Covington. A reception will follow at the Tchefuncte Country Club.

The bride-elect, whose mother is the former Miss Melody Morse, graduated from St. Scholastica Academy in Covington and Louisiana State University in Baton Rouge, where she earned a bachelor’s degree with honors in child and family studies with a minor in sociology and was a member of the Kappa Kappa Gamma Sorority.

Miss Barousse is presently employed by the Academy of the Sacred Heart in New Orleans as an administrator, Little Hearts coordinator and the Mater Campus activities director.

Miss Barousse is the granddaughter of Mrs. Katherine Hadley Morse and Mrs. Stanley Albert Greig, both of Covington. Her father is a cousin of Homer Ed Barousse Jr. of Crowley.

The prospective bridegroom graduated in 2003 from Notre Dame High School in Crowley, where he played on the 2000 state championship football team. He graduated from the University of Louisiana at Lafayette in the honors program in 2007, receiving his Bachelor of Science degree in biology. While at ULL he served as president of the Pre-Professional Society and was the founder of Camp Cajun, a camp for handicapped children. He worked as an orderly at the American Legion Hospital in the emergency department and as an assistant to Dr. Michael Holland during his college years. Chase and his Pre-Professional Society participated in many fundraising activities for St. Jude Children’s Research Hospital and would drive to visit the hospital in Memphis, Tennessee, to deliver the donation yearly. He received a service award at ULL, one of only two awards given by the department of biology, for his years of service to the college and the Lafayette community.

He was accepted and received a scholarship to attend LSU Medical School in New Orleans, where he received his Doctor of Medicine degree in 2011. He was accepted by the Harvard Medical School for orthopedic residency, where he is presently completing his fourth year. He is employed through the Harvard Medical School combined orthopedic residency program where he works at Massachusetts General Hospital, Brigham’s Women’s and Children’s Hospital, Boston Children’s Hospital and Beth Israel Hospital.

The couple will reside in Boston, Massachusetts, while Dr. Schumacher completes his 5th year of residency and they will relocate in June 2016 for an orthopedic fellowship program in joints specializing in hips and knees.

After surviving the “Biblical” snow storms that battered Boston this winter with 9 feet of snow and -35-degree windchill, the couple hopes to eventually return to their beloved Louisiana for Dr. Schumacher to start his practice in orthopedics after 14 years of college, medical school, residency and fellowship training.