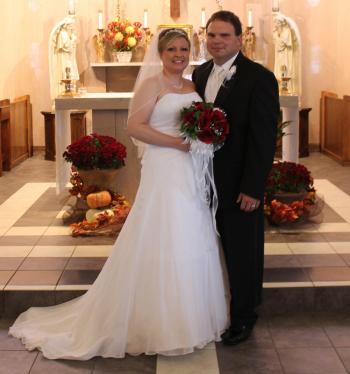 Lacey graduated from Iota High School in 2004 before attending Louisiana State University – Eunice, where she earned a degree in business management in 2007. She is presently employed at The Bank in Jennings.

The groom is the son of Germaine and Francis Frey of Iota. His grandparents are the late Bessie and Clem Manuel Sr. of Eunice, and Sylvester Frey and the late Helen Reiners Frey of Iota.

Brandon is a 2003 graduate of Iota High School and a 2006 graduate of Louisiana State University – Eunice with a degree in business management. He is currently employed by the LSU AgCenter Rice Research Station.

Guests at the wedding were greeted by Camille Bieber, cousin and godchild of the groom, and Charley Bieber, cousin of the groom. The girls wore white silk dresses with tulle-overlaid tea length skirts. Red sashes at the waists provided a burst of color, and their outfits were perfectly completed with red cowboy boots.

Guests were ushered to their seats by Chad Bertrand, cousin of the bride, and Michael Miller, friend of the groom.

Selected scriptures were read by Anne Ritter, the aunt and godmother of the groom, and Melanie Broussard, cousin of the groom.

Escorted to the aisle by her father, the bride was gorgeous in a sleeveless white chiffon gown with a fitted, side-gathered bodice and slightly curved neckline. The dress was embellished with beaded lacework, and the back of the skirt flowed into a stylish sweep train.

For her headpiece, Lacey selected a white, two-tier elbow-length veil trimmed with pearls, beads and sequins and affixed with a scrolled tiara accented with pearl clusters and Swarovski crystals. A matching necklace and earrings completed her ensemble.

Jessica Gotte, sister of the bride, served as matron of honor. Bridesmaids were Monica Willis and Misty Hearod, cousins of the bride.

The attendants were clad in full length apple red chiffon dresses featuring halter necklines. The gathered waistlines flowed into soft pleating that cascaded down the sides of the skirts.

The bridesmaids carried bouquets of miniature white rosebuds accented with tulle. The matron of honor’s bouquet was distinguished by the addition of interspersed red roses.

Jhadyn Gotte, the bride’s godchild and niece, served as flower girl. She was dressed in a white satin A-line gown with beaded metallic embroidery and cap sleeves.

Derek Frey, a brother of the groom, served as best man. His two other brothers, Jason Frey and Blaise Frey, stood as groomsmen.

Cole Broussard, cousin  of the groom, served as ring bearer.

For her daughter’s wedding, the mother of the bride, the former Rhonda Davis, selected a red sequined blouse paired with black slacks. A silver silk jacket completed her ensemble.

The mother of the groom, the former Germaine Manuel, chose a two-piece suit in royal blue embellished with royal blue beadwork on the collar and cuffs.

Both mothers wore corsages of red and white roses with crystal crosses.

Following the ceremony, guests celebrated with the newlywed couple at a reception held at the Knights of Columbus Hall in Crowley.

The bride’s round, three-tiered white cake featured pineapple and strawberry fillings. It was trimmed with red ribbon and roses and completed with an elegant silver cake topper in the shape of the initial “F.”

The cake was displayed before a row of white columns draped with sheer white fabric. The columns were adorned with bows in the bride’s chosen colors of red, white and silver. The bride’s bouquet was placed in an antique silver vase and set beside the cake along with white candles in silver holders.

The cake was served by the bride’s cousin, Yvonne Bourque.

The groom’s chocolate cake was baked and decorated in a rice farming theme by the groom’s mother and godmother.

Antique barn doors entwined with grapevines, burlap ribbon and rice stalks provided the perfect backdrop. The antique wooden table holding the cake was draped with burlap and finished at each corner with a bundle of rice. A photograph of the bride and groom in a rice field was displayed alongside a miniature tractor with a miniature bride and groom.

Anne Ritter, the godmother of the groom, served the cake.

Out-of-town guests traveled from Texas and various points throughout Louisiana.

On the evening prior to the wedding, the parents of the groom hosted a rehearsal dinner at the Rice Palace in Crowley, where guests were served a variety of seafood dishes.

Following a wedding trip to Arkansas and Missouri, the couple is residing in Iota.