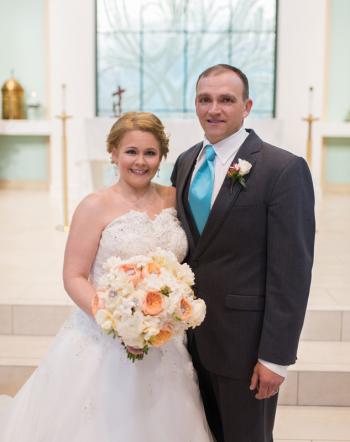 Shellie Marie Blanchard of Baton Rouge and Kevin Andrew Gauthreaux of Crowley were united in the sacrament of holy matrimony on Saturday, April 18, at St. Jude the Apostle Catholic Church in Baton Rouge.
The Rev. Michael Collins officiated at the 1 p.m. Nuptial Mass.
The bride is the daughter of Mr. and Mrs. Kenneth Michael Blanchard of Baton Rouge. She is the granddaughter of the late Mr. and Mrs. Joseph Henry Bernard Jr. of Brusly and the late Mr. and Mrs. Victor Jerome Blanchard Jr. of Baton Rouge. The bride’s paternal aunt, Pat Poret, was honorary grandmother.
The bridegroom is the son of Mr. and Mrs. Andrew Joseph Gauthreaux of Crowley. He is the grandson of Mrs. Edith Moss Gauthreaux and the late Meonce Gauthreaux and the late Mr. and Mrs. Oble Ernest Esclovon, all of Crowley.
Escorted by her father, the bride was stunning in an ivory A-line gown of organza and tulle featuring an embellished bodice with a dropped waist and accented with diamante-adorned lace and a chapel length train. Her delicate fingertip veil was edged in matching scalloped lace. She carried a mixed bouquet in tones of ivory featuring coral Juliette roses and rhinestone accents.
As a special sentiment, the wedding rings of the bride’s two grandmothers were tied into her bouquet and she wore a sixpence in her shoe.
Attending the bride as matron of honor was Jan Denby, the bride’s childhood best friend. Bridesmaids were Heather Blanchard and Megan Blanchard, sisters-in-law of the bride, and Anne Dill and Laura Hayes, friends of the bride and groom. The bride’s attendants wore strapless tiffany blue floor length gowns and carried bouquets of coral and white roses with rhinestone accents.
Honorary flower girl was Aubrie Blanchard, the bride’s niece.
The groom was attended by his brother, Brett Gauthreaux, as best man. Groomsmen were Devin Blanchard and Grant Blanchard, the bride’s brothers, and David Wriborg, Danny Barzare and Steven Harris, best friends of the groom. Ushers were Adam Blanchard, the bride’s godchild, and Griffin Dorr and Grant Gauthreaux, nephews of the groom.
Program attendants were Alec Babin, the bride’s godchild; Gibson Gauthreaux and Gabriel Gauthreaux, nephews of the groom; and Hope Wriborg, godchild of the groom.
Kysha Gauthreaux, sister-in-law of the groom; Jerry Blanchard, the bride’s uncle; and Henry Soniat, lifetime friend of the bride, were readers. Presenting the gifts were the bride’s aunts, Babs Babin, Bonnie Breaux, Alice LeBlanc and Ellen Tauzin. Jan Denby presented a special vocal selection during the Mass.
A reception followed at Oak Lodge Reception and Conference Center.
The bride’s four-tiered, Bavarian crème wedding cake was iced in ivory buttercream, topped with fresh coral and white Juliette roses and detailed with swirl designs on each tier. Bridal attendants and friends pulled Cajun charms from the cake before it was cut by the bride and groom. It was served by Bonnie Breaux, the godmother of the bride.
The groom’s cake was chocolate and reflected his love for hunting and outdoors. It was airbrushed in camouflage and was set on a tree stump in a rustic scene with burlap and moss. It was served by Estelle Trahan, friend of the groom.
The groom’s parents hosted the rehearsal dinner at Mike Anderson’s Seafood on Thursday evening prior to the wedding.
The couple honeymooned in San Francisco and now resides in Crowley.