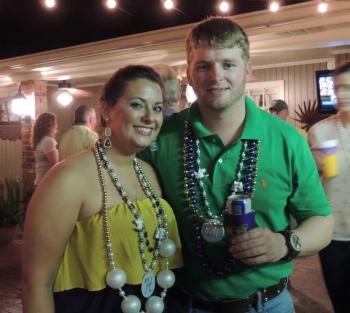 The Midland home of Joni and Dale Thibodeaux was decked out for Mardi Gras fun for a recent couple’s shower held in honor of bride-elect Amber Nicole Thibodeaux and her chosen groom, Blaire Adam Hargrave.

In addition to the Thibodeauxs, the 6 p.m. shower, held on Saturday, Oct. 5, was hosted by Lori and Steven Broussard, Millie and Chuck Broussard, Leticia and Tommy Carlson, Debbie and Keith Henry, Lenore and Ricky LeBlanc and Lisa and Karlon Thibodeaux.

The Mardi-Gras-themed event included plenty of Mardi Gras decorations and beads, and all of the guests wore purple, green or gold attire and enjoyed the traditional king cake.

A highlight of the evening was the masked Mardi Gras courirs who made a run through the surprised shower guests.

For the shower, the bride-elect wore a purple and gold maxi dress with green and gold jewelry, and the prospective groom donned a green polo shirt to match.

Approximately 50 guests were on hand to celebrate with the couple, with some having traveled from as far as West Monroe and Baton Rouge.

The bride-elect is the daughter of Kathy and Alvin Thibodeaux of Egan.

She is the granddaughter of the late Obray and Eula Abshire Sonnier, and the late Frank and Ada Abshire Thibodeaux, all of Crowley.

Amber and Blair will be wed during a 7 p.m. Nuptial Mass on Friday, Nov. 8. Fr. Neil McNeil and Fr. Randy Moreau will concelebrate the Mass at St. John the Evangelist Catholic Church in Mermentau.

Following their wedding, the couple will reside in Crowley.