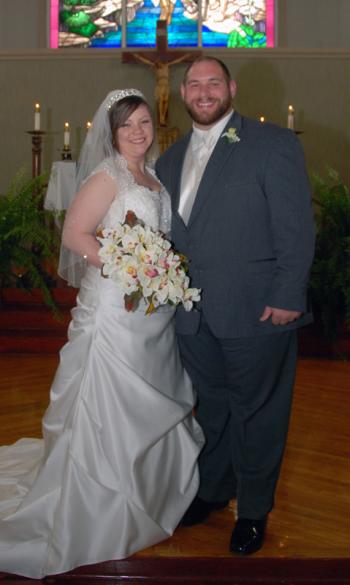 An early afternoon wedding united Hannah Domingue of Lyons Point and Stephen Ogea of Ragley on Saturday, July 23.
Fr. Charles McMillin officiated the 1 p.m. nuptial ceremony, along with Fr. Clint Trahan, Fr. Richard Broussard, Fr. Tim Goodly and Deacon Tom Summers, at St. John the Baptist Catholic Church in Lyons Point.
The bride is the daughter of Geretta and Clayton Domingue of Lyons Point. She is the granddaughter of Velta Simon of Lyons Point and the late Frank Simon and Bertha Domingue of Crowley and the late Gerald Domingue.
Hannah graduated from Midland High School in 2007 before attending McNeese State University, where she earned a Bachelor of Science degree in nursing in 2012. She is presently employed as a registered nurse with CHRISTUS St. Patrick Hospital in Lake Charles.
The groom is the son of Roxanne and Aldes Ogea of Ragley. His maternal grandparents are Juanita and Hubert Vincent of Sulphur and the late Rita Vincent, and his paternal grandparents are the late Artimese and Fernest Ogea of Sulphur.
Stephen is a 2008 graduate of South Beauregard High School and is currently employed by the Calcasieu Parish Tax Assessor’s Office.
Given in marriage by her father, the bride was beautiful in an ivory satin gown featuring beaded lace cap sleeves and an empire waist, with a gathered skirt that flowed into a long train.
She paired her gown with a bead-trimmed waist length veil secured by a pearl and rhinestone tiara.
She carried a cascading bouquet of pink-centered orchids and multi-colored leaves with the stems wrapped in her late grandfather’s handkerchief.
The bride was attended by her sisters Heidi Monceaux as matron of honor and Heather Moore, Hillary Menard and Holly Domingue as bridesmaids. They were clad in lovely floor length chiffon gowns in mint green.
Junior bridesmaids were Emily Moore and Chelsey Simon, goddaughters of the bride, who wore floor length mint-colored dresses featuring ivory sashes.
The bridal attendants carried bundles of pink, ivory and small mint green orchids tied with sheer gold ribbons.
Emma Menard, goddaughter of the bride, served as flower girl. She wore a floor length mint lace dress with an ivory sash complemented by a halo-style flower headband and carried a pomander ball of pink and ivory orchids suspended from a sheer gold ribbon.
The groom’s father served as best man, with Jonathon Moore, Matt Monceaux and Adam Menard, brothers-in-law of the bride, and Chris Dooley, friend of the groom, standing as groomsmen.
The groom wore a charcoal grey tuxedo paired with an ivory vest and tie, while the groomsmen wore light grey tuxedoes with light grey vests and mint ties.
Jeremy Monceaux, godchild of the bride, served as ring bearer and wore a light grey tuxedo with a light grey vest and mint tie.
Serving as ushers were Timothy LeBlanc and Kemmeth Simon, godfathers of the bride.
Music for the ceremony was provided by saxophonist Trey Hayes and vocalists Kim Guidry (lead), Rhonda Bussy, Mike Bussy, Rechelle Broussard, Kevin Simon, Frankie Simon, Larry Hebert, Susan Mayes and Gayla LeBlanc.
Following the wedding, family and friends joined the newlywed couple for a reception at the International Rice Festival Building in Crowley.
The tables were topped with gold swirl-design runners and tall clear vases filled with mint-colored orchids.
Guests enjoyed a variety of finger foods served buffet-style, as well as an afternoon of dancing.
The bride’s five-tiered round cake was decorated with rose gold icing and a paisley design that cascaded, along with ivory orchids, down its side. The confection was topped with a bundle of ivory orchids.
In lieu of cake, a variety of pies, including potato, pecan, lemon and chocolate, were served on behalf of the groom.
On the Thursday evening prior to the wedding, Joleen and Troy Thibodeaux, friends of the groom’s parents, hosted a rehearsal dinner at the home of the groom’s parents.
Following a seven-day cruise from New Orleans to Jamaica, Grand Cayman Island and Cozumel, the couple is residing in Ragley.