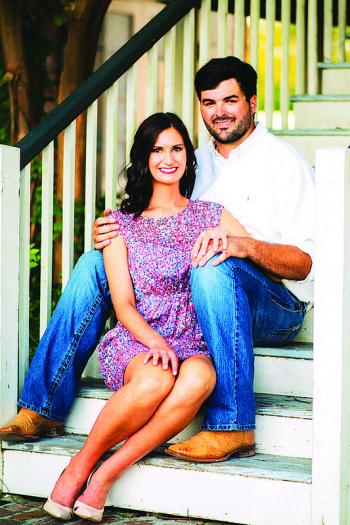 Ellyn Claire Boone and Alexander Louis Lalande, both of Branch, have announced their engagement and commitment to be wed on the evening of Saturday, Dec. 26. Fr. Wayne Duet will officiate the 7:30 p.m. nuptial ceremony at St. Edward’s in Richard.
The bride-elect is the daughter of Lynn and Charlene G. Boone of Branch. She is the granddaughter of Herbert and Elaine L. Gossen of Roberts Cove, and of Ramona Boone of Branch and the late Robert L. Boone.
Ellyn graduated from Church Point High School in 2011 before attending Louisiana State University-Eunice, where she earned a degree in business administration in 2014. She is presently a student at the University of Louisiana at Lafayette, where she is earning a bachelor’s degree in business management, with an anticipated 2016 graduation date. She is employed at Wiggins & Sons in Lafayette.
The prospective groom is the son of Paul and Celeste H. Lalande of Church Point. His maternal grandparents are Philip and Dolores “Bubbles” Z. Habetz of Roberts Cove, and his paternal grandparents are Daniel Lalande of Crowley and the late Andreé Lalande.
He is a 2008 graduate of Notre Dame High School of Acadia Parish and a 2012 graduate of the University of Louisiana at Lafayette, where he earned a Bachelor of Science degree in petroleum engineering. He is currently employed as a subsea field engineer with Expro.