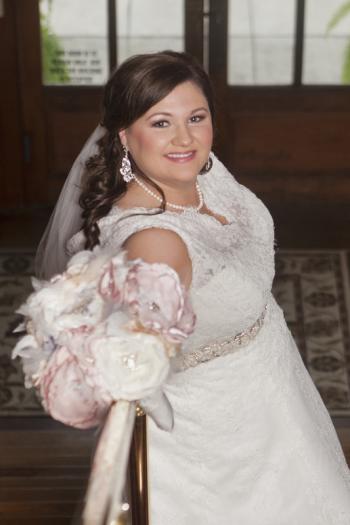 Ann Michelle Legé of Crowley and Kent Jude Olivier of Sunset were united as husband and wife during a double ring ceremony at St. Michael the Archangel Catholic Church in Crowley on the evening of Saturday, Nov. 30. Father Mikel Polson officiated the 6:30 p.m. nuptials.

Ann is a 2003 graduate of Notre Dame and a 2006 graduate of the Lafayette General Medical Center School of Health Sciences. She is presently employed at the Cardiac Institute of the South in Lafayette.

The groom is the son of the late Ruth and Lear Olivier of Sunset. He is also like a son to Gladys Woods of Sunset, a very special lady who helped care for him as a newborn and helped his mother raise him after the sudden death of his father when he was young. He is the grandson of the late Mr. and Mrs. Aldus Mouton of Sunset, and Leticia Olivier of Arnaudville and the late Carrol Olivier.

Kent graduated from Beau Chene High School in 2000 before attending the University of Louisiana at Lafayette, where he earned a bachelor’s degree in business management in 2005. He is currently employed with Halliburton.

Music for the ceremony was provided by trumpeter Will Green, violinist Lauren Baher and organist Paul Baher, accompanied by vocalist Jodi Bollich.

Guests were ushered to their seats by Beau Miller, friend of the groom, and Casey Faul, cousin of the groom, as various classical musical selections were played.

The bride was escorted to the altar by her father, Larry Legé, to the strains of Wagner’s “Bridal Chorus.” She was gorgeous in an elegant, graceful fit and flare tulle gown by San Patrick. The sleeveless, fitted bodice featured a sheer lace neckline with a small, delicate V, and the gown was defined at its waistline by a beaded belt of crystals and pearls. Delicate lace overlaid the tulle skirt and flowed down the back of the dress, which ended in a chapel length train.

For her headpiece, Ann selected a matching cathedral length tulle veil with pearl- and crystal-trimmed edges.

She carried a bouquet of handmade fabric flowers, in pinks and whites, with crystal and pearl centers. The bouquet was hand-wrapped with a lace handkerchief belonging to her grandmother Legé and contained small framed photos of the groom’s late parents.

In keeping with tradition, Ann wore her mother’s pearl necklace as “something old,” her pink shoes as “something new” and her veil, loaned to her by her friend Katie Harrington, as “something borrowed.” An Irish linen monogrammed handkerchief, handcarried from Ireland by her mother, was “something blue.”

The bridesmaids entered the church to “Canon in D” by Pachelbel.

Katie Robin, friend of the bride, served as matron of honor. Serving as bridesmaids were Katie Harrington, Mary Crow, Ann James, Naomi Melancon and Brooklyn Arceneaux, friends of the bride; and Katie Hanks, Amy Davis and Maggie Miller, cousins of the bride.

For her daughter’s wedding day, the mother of the bride, the former Cynthia Verret, selected a high-necked, three-quarter sleeve magenta jacket with black embellishments paired with a black tea length skirt.

Selected Scriptures for the service were read by Monica Savoie and Paige Faul, cousins of the groom.

Immediately following the ceremony, guests at the wedding celebrated the newlywed couple with a reception at the Grand Opera House of the South in Crowley.

Old lanterns were placed throughout the reception area, and guest tables were topped with pink and white hydrangeas in vases filled with pearls and crystals surrounded by votive candles and pink rose petals.

A special table held photographs of the groom’s late parents.

The bride’s four-tiered square wedding cake was decorated in a scroll design and embellished with crystal ribbon finished with bows with pearl and crystal centers. It was served by the godmother of the bride, Debbie Marquart.

The groom’s two-tiered cake, which was served by his godmother, Vonda Mouton, reflected two separate themes. The top tier was decorated in a sports theme to include teams from the University of Louisiana at Lafayette, the New Orleans Saints and Louisiana State University and topped with Louisiana state confections. The bottom tier was made in the shape of a crawfish pot overflowing with crawfish, potatoes and corn.

Out-of-town guests traveled from Texas and  throughout Louisiana.

A week prior to the wedding, the aunt and uncle of the groom, Mr. and Mrs. Carl Savoie, hosted a rehearsal dinner at the Linscombe camp in Estherwood, where guests enjoyed a delicious gumbo.

Following a wedding trip to Alabama, the couple is residing in Sunset.