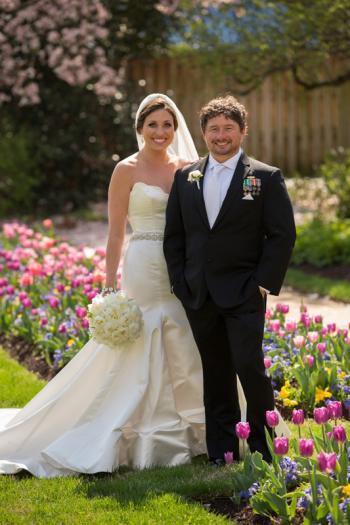 Ashley Paige Primeaux and Erick Benjamin Knezek were united in the Sacrament of Holy Matrimony at the United States Naval Academy Chapel in Annapolis, Md., at 2 p.m. on Saturday, April 13.

She is a 2000 graduate of Comeaux High School and a 2004 graduate of the University of Louisiana. She is the founder and owner of Blanc Bridal, a high-end bridal boutique located in Parc Lafayette.

The groom is the son of Mrs. Fina and Mr. Dale Knezek of Lafayette.

He is a 1992 graduate of Lafayette High School and a 1996 Honors graduate of the United States Naval Academy with a Bachelor of Science in ocean engineering. He also graduated with a Masters of Engineering in ocean engineering from Texas A&M University in 1997. He is a veteran of the U.S. Navy having served honorably as a U.S. Naval Officer in the Fighting Seabees and as a Deep Sea Diver.

Upon leaving the Navy in 2002, the groom built a career as a federal contractor providing specialty marine construction services to the Navy and other agencies. He co-founded Truston Technologies, a leading provider of specialty marine construction services with offices across the country and projects worldwide, in 2005. He serves the community of Lafayette as a board member of the 705 Club and president of the Acadiana Entrepreneur Group, and he is an active Christian missionary with a focus on Central America.

Escorted by John Egle, the bride wore a custom Reem Acra gown for the ceremony. It had rich satin fabric with a scalloped sweetheart neckline and plunging V-shaped back, an Anne Barge crystal belt and a trumpet skirt that flowed into a six-foot train. The gown was paired with a 14-foot long smooth silk tulle Pronovias cathedral veil.

The reception gown was a Badgley Mischka off the shoulder gown of concentric ruffled silk organza scallops with embroidery at the neckline, waist and modified A-line skirt.

The going-away dress was an Anne Barge three-dimensional sweetheart mini dress made of Guipere flower lace.

Serving as gift bearers were Cindy Morgan and Joan Boudreaux.

The photographer for the rehearsal dinner, wedding ceremony and reception was Denis Reggie, who photographed the bride’s mother’s wedding 37 years ago in Crowley.

The reception was held at The Severn Inn on the Severn River, directly across from the U.S. Naval Academy. The reception was a fun-filled classy combination of a traditional four-course sit-down dinner with a military party atmosphere.

Guests were welcomed at The Severn Inn with cocktails complete with a premium open bar, raw bar with oyster shucker and shrimp and crab claws while listening to a live duo jazz ensemble. The outdoor riverside porch highlighted a cigar bar with a selection of premium cigars as well as a riverside premium open bar.

After cocktails, the bride and groom made their official entrance through a military sword arch following U.S. Navy tradition. The bride made her entrance in her second of three wedding dresses for the day.

The cocktail tables in the bar had simple but stunning small vases filled with white pebbles and seculium. The head table had seven low conversational centerpieces in square vases that were detailed with variegated hosta leaves and filled with white and green hydrangeas, green vivernums, french parrot tulips, green roses and cymbidium orchids in a compact design.

The guest table centerpieces were divided between tall and low. Vases were detailed with variegated vinka vine and topped with white and green hydrangeas, different shades of green vivernums, green roses, tulips and peonies.

The bride’s round, three-tiered cake was decorated with smooth white buttercream icing embellished with navy blue and white ribbon. Inside were layers of red velvet, almond amaretto and chocolate. It was topped with light green vivernums, white hydrangeas and white peonies.

Following dinner, the live band ramped up the party with fun dance music. At the conclusion of the reception, the bride donned her third wedding dress as the bridal party brought their party into the historic downtown Annapolis area.

Upon returning from a three-week honeymoon in Italy,  the couple is residing in Lafayette.