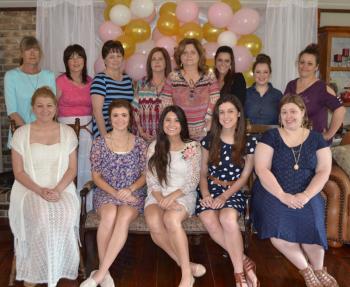 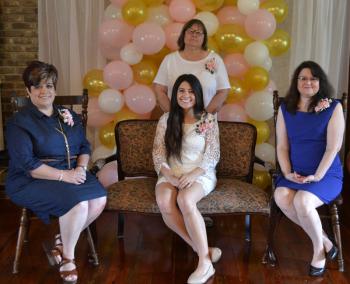 Family and friends joined Katelyn Richey, bride-elect of Josh Spell, for a festive shower held in her honor on Saturday, April 9.
The bride-elect is the daughter of Curt and Karla Richey of Crowley. Her prospective groom is the son of Randy Spell of Crowley and Bonnie Spell of Rayne.
The mid-day shower was held at the Eunice home of Jilliane Bischoff and was co-hosted by Marianne Bischoff, Brenda Comeaux, Shandy Comeaux, Amy Hebert, Danielle Hebert, Terry LeBlue, Valerie Monte, Brittany Morgan, Dianna Potier, Jackie Richey, Jennifer Richey and Sharon Trahan.
The approximately 25 guests on hand enjoyed mimosas and coffee along with a brunch-style menu that included sandwiches, vegetable and fruit trays, waffle and syrup cups, quiche and crawfish dip. In addition to a traditional shower cake, sweets served included petit-fours and strawberry and cream cheesecake.
For her shower, Katelyn selected a white dress with a white lace overlay and wore a corsage of miniature pink roses tied with gold ribbon.
The mother of the bride chose a knee length dress in navy blue, while the mother of the groom was clad in a denim button-down knee length dress. In honor of the day, they were presented with corsages of miniature pink roses tied with white ribbon.
The bride-elect’s maternal grandmother, Judy Perry, was a special guest at the shower and also wore a corsage of miniature pink roses tied with white ribbon.
The grandparents of the bride-elect are Donnie and Judy Perry and the late C.L. and Joanne Richey, all of Crowley.
The prospective groom is the grandson of Rodney Comeaux of Rayne and the late Olivia “Sis” Comeaux, and of Lucille Spell of Crowley and the late Clorist “Chip” Spell.
The couple will be wed at 6:30 p.m. on Friday, May 2, at Immaculate Heart of Mary Catholic Church in Crowley.