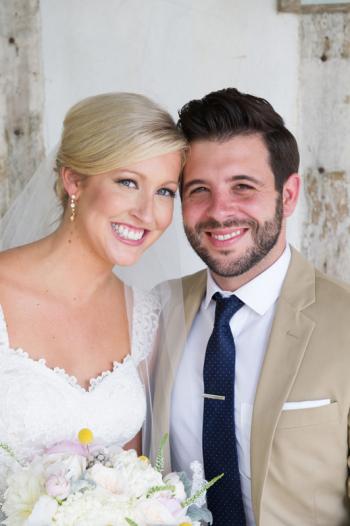 Katherine Leigh Montgomery and Stuart Dennis Helo, both of Baton Rouge, recently exchanged wedding vows at the New Hope Chapel at Acadian Village in Lafayette.
Judge John Trahan officiated the joyous ceremony at 6 p.m. on Saturday, May 16.
The bride is the daughter of Deborah Jacobsen Montgomery of New Orleans and the late Dennis Ray Montgomery. She is the granddaughter of the late Mr. and Mrs. Donald Jacobsen of New Orleans and the late Mr. and Mrs. Marcus Montgomery of Mississippi.
Katie graduated from St. Mary’s Dominican High School before attending Our Lady of the Lake College and the University of South Alabama. She holds a Master of Science degree in nursing and is certified as a pediatric primary care nurse practitioner. She has been employed for five years as a Registered Nurse in pediatric hematology/oncology at Our Lady of the Lake Children’s Hospital in Baton Rouge and is also a pediatric nurse practitioner at St. Jude Children’s Research Hospital’s Baton Rouge affiliate clinic. She is a member of the American Academy of Pediatrics.
The groom is the son of Ronald J. and Monica Landry Helo of Crowley. His maternal grandparents are Mrs. Rosalie Scalco Landry of Crowley and the late Mr. Dennis Landry, and his paternal grandparents are Mr. Kermit Helo Sr. of Crowley and the late Mrs. Dorothy Hebert Helo.
Stuart is a graduate of Notre Dame High School of Acadia Parish, Louisiana State University and Harvard University. He holds a Master of Architecture degree and is a member the American Institute of Architects and the Urban Land Institute. He is currently employed as Vertical Development Unit Lead/Program Director at CSRS, Inc., in Baton Rouge.
Escorted by her uncle, Christopher Casseri, the bride was gorgeous in a lace overlay floor length gown featuring a sweetheart neckline and mermaid silhouette. The slim line dress was defined at the natural waist with a crystal-embellished band, and the back of the skirt flowed into a cathedral length train.
Katie paired her gown with a lace-trimmed fingertip illusion veil.
She carried a romantic mixed bouquet of ivory and blush roses, peonies and ranunculus accented with dusty miller and interspersed with Veronica and silver brunia berries. Pinned to the bouquet were tiny framed photographs of her late father and late maternal grandparents, as well as a necklace, engraved in her late father’s handwriting, that read, “I love you, Dad,” and was a gift from her mother and siblings. Along with her bouquet she carried a handkerchief fashioned from the groom’s christening bonnet and two rosaries, one that had belonged to her maternal grandmother and one given to her as a wedding gift by her maternal aunt.
Maggie Rae Montgomery, sister of the bride, served as maid of honor. Serving as bridesmaids were Mallory Elise Casseri, cousin of the bride, and Emily Anne LaCour, Jessica Sages Lee, Rebecca Ann Mahoney, Jamie Leigh Russo and Samantha Gail Wall, all friends of the bride. Junior bridesmaids were Abby Anne Arledge and Adele Gwinn Jacobsen, cousins of the bride.
The bridal attendants wore deep blue above the knee dresses featuring criss cross bodices and V-necklines and finished with cap sleeves and cummerbund-style waist bands. The junior attendants wore matching dresses featuring straight across halter necklines.
For flowers, they carried smaller versions of the bride’s bouquet.
The duties of best man were fulfilled by Ronald Helo, father of the groom. Standing as groomsmen were Matthew Monceaux, Josef Hensgens, Adam Marchand and Brad Mire, friends of the groom, and Brandon Montgomery, Marcus Montgomery and Justin Montgomery, brothers-in-law of the groom.
The groom and his groomsmen were clad in tan J. Crew suits paired with deep blue ties and white linen pocket squares. They wore boutonnieres of white ranunculus tied with jute twine.
The groom carried his late maternal grandfather’s rosary in his pocket.
Flower girls were Ella Elizabeth Jacobsen, cousin of the bride, and Rose Marie Landry, the groom’s cousin and goddaughter. Graham Michael Montgomery, nephew of the bride, served as ring bearer.
Brad Cook and Brandt Daigle, both friends of the groom, served as ushers.
Following the ceremony, family and friends joined the couple for a reception at the Acadia Village Pavilion.
Musical selections for the ceremony were provided by Daniel and Madison Dumas.
Selected scriptures were read by Dorothy Jacobsen, aunt of the bride; Janet Stelly, aunt of the groom; and Paul Landry, uncle of the groom.
A large wooden initial H made by the groom hung over the entryway to the pavilion, and billowing white curtains were hung at the posts. The ceiling was festooned with small white lights.
Guests signed in at a table that was also made by the groom. Rather than a traditional guest register, the couple requested that guests leave their greetings in a copy of “The Louisiana Houses of A. Hays Town,” which reflected the groom’s occupation as an architect.
The guest tables were topped with white cloths and burlap runners along with various flowers and simple greenery placed in clear glass bottles, as well as Mason jars filled with flowers that matched the bride’s bouquet. The greenery and flowers were displayed on slices of tree trunks and in vintage wooden crates.
In addition to the various traditional refreshments, guests enjoyed the couple’s signature cocktail, the Mint “Stu”-lep.
The bride’s three tiered ivory cake, which included traditional Southern cake pulls, was adorned with pearls at the bottom of each tier and decorated with fresh flowers matching the bride’s bouquet. It was displayed on an old wooden spool table with criss cross burlap runners and was surrounded by the bouquets of the bride and her attendants.
Cake pops decorated as golf balls were served on behalf of the groom, along with traditional Italian cookes, Biscotti Regina and Pizzelles, that were made by his mother.
Following a wedding trip to Emerald Bay, Bahamas, the couple presently resides in Baton Rouge.