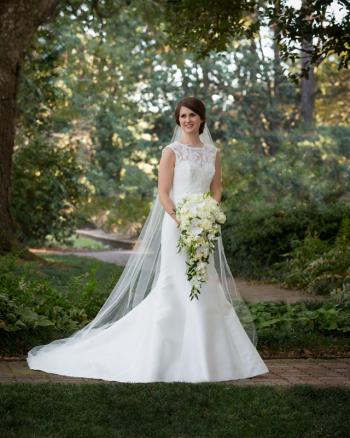 In the vestibule of the Cathedral, Anna Kathryn Moody, Katherine Anna Hundley, Margaret Elizabeth Gielen, and Victoria Anne Laprairie, cousins of the bride, greeted guests with programs, the art for which was inspired by the stained glasswork of the Cathedral and designed by the bride’s sister, Rosalind Mary Robertson. John Barret Bertucci, Thomas Adam James and Dr. James Richard White, close friends of the groom, served as ushers.

Accompanied by Bach’s “Jesu, Joy of Man’s Desiring” as a prelude, the bride’s mother was escorted by her son Samuel Andrew Moody Robertson while the groom escorted his mother to their respective family pews. Each mother carried a small nosegay of white roses and camellias in a silver holder.

The procession of the wedding party began with Pachelbel’s “Canon and Gigue in D” as the bridesmaids, Natalie Sue Gasmire, Natalie Kristine George, Alice Emling Johnson, and Lyndsey Miller Lofland, close friends of the bride, entered the Cathedral.

The flower girls wore winter white, silk shantung, tea length dresses with eucalyptus tinted sashes and trim. They held wedding pomanders of the bridal flowers at their wrists and wore flowered wreaths tied in satin on their heads. The ring bearer topped his white dress shirt, suspenders, and bow tie with a navy blazer and grey pants. The gentlemen of the wedding party were formally attired in black tuxedos with stephanotis boutonnières.

Clarke’s “Prince of Denmark’s March” heralded the bride’s entrance on the arm of her father. She was radiant in her chosen gown of silk magnolia with a lace enhanced bodice and lace illusion neckline. The delicate back lines of the dress laced together and into the flowing cathedral length train. A veil of silk illusion in like shades of magnolia blended with the train. She carried a cascading bouquet of phaelonopsis and dendrobium orchids, hydrangea, freesia, stephanotis, stock, Escimo roses and ruscus. She wore as her only jewelry her mother’s earrings that had been a gift from the bride’s father.

Following the Celebrant’s welcome and opening prayers, Jill Lea Doise and Kathleen Doise Brennan, sisters of the groom, offered readings from scripture including Genesis 2:18-24, Psalm 128, and Colossians 3:12-17, while Deacon Broussard read the Gospel from John 2:1-11. Catherine Russo Hales and Katherine Alyse Prince, friends of the bride and groom, along with Mary Claire Lagroue and Ellen Charlotte Leonards, cousins of the bride, carried the offertory gifts.

Christmas décor of poinsettias and greenery graced the Cathedral, with wedding foliage of magnolia leaves, cedar, seeded eucalyptus, berries and English ivy marking the center aisle. Pedestals of wedding flowers at the doors framed the entrance for the bride and her attendants.

Traditional Louisiana foliage highlighted with white camellias, Chablis roses, Escimo white roses and snowy hydrangeas set the staging for the reception immediately following the ceremony at the City Club River Ranch. Guests were received first to the music of pianist Shawn Roy and then invited into the ballroom for dancing to the music of Shaon and the Girls with Success Band from New Orleans. Tea girls with small dinner bells announced the cutting of the wedding cakes. The bride and groom first danced to “La Vie en Rose” and toasted with fifth generation family wedding goblets. Amidst well wishes and sparklers, the newlyweds drove away for their wedding trip with sunroof farewells and the bride in Minnie Mouse ears. They will be at home in Lafayette.

The groom’s parents honored their son and his bride-elect with their wedding party at dinner on the eve of their marriage at Mazen’s Grill in Lafayette.