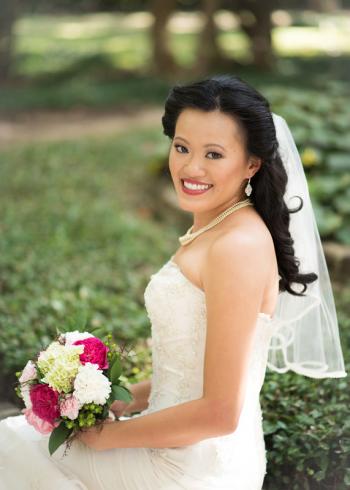 Viphone Souriya of New Iberia and Mathew Albarado of Crowley were united in holy matrimony on the afternoon of Saturday, Dec. 13, 2014, at Sacred Heart of Jesus Church in Broussard.

The groom is the son of Michael John and Arlene Albarado of Crowley. He is the grandson of the late Hersey and Thelma LeJeune and the late Nolan and Verdi Albarado.

He graduated from Notre Dame High School of Acadia Parish in 2006 before enrolling at the University of Louisiana at Lafayette, graduating with a Bachelor of Science degree in nursing in 2012. Mathew is also employed at St. Martin Hospital in the emergency department.

The parents of the groom were escorted to their seats by the groom himself.

Manyonh Nini Souriya, younger sister of the bride, served as maid of honor. Attending Viphone as bridesmaids were Linda Lee, Daravy Derouen, Nancy Pham and Ginny Pollard, all friends of the bride.

Brianna Thongmanh, a baby cousin of the bride, served as flower girl.

The groom selected his friend Kyle Jones to fulfill the duties of best man. Standing as his groomsmen were Matthew Briggs, Myles Derouen, Ryan Guidry and Jarrod Gonzales, all friends of the groom.

Jacob Smith and Damian Hubbard, friends of the groom, served as ushers.

Following the ceremony, family and friends joined the newlywed couple at a reception held at the Veteran’s Memorial Building in New Iberia.

Guests enjoyed a variety of Cajun foods as well as Laotian foods that were prepared by the bride’s family and friends.

Midway through the reception, the bride and groom changed into traditional Laotian wedding attire. The bride wore a beautiful red silk calf length skirt called a “sinh” that was decorated with hand-sewn diamond-shaped designs. She paired it with an ivory silk blouse trimmed in silver. The groom was clad in a champagne silk dress shirt and billowy silk maroon pants, known as a “salong,” trimmed with gold silk designs.