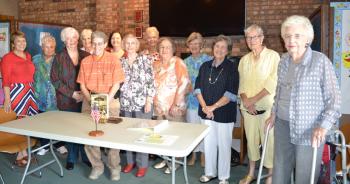 The Attakapas Study Club of Crowley gathered at the Acadia Parish Library on Sept. 10 for their first meeting of the new club year.

Vice President Liz Regan called the meeting to order and introduced Ann Mire, assistant librarian, who was the guest speaker for the meeting and presented a program entitled  “Library 101.”

Parliamentarian Joanna Pruitt led the group in the Pledge and the club collect. Roll was called and announcements were read by Secretary Gerry Meche.

During her presentation, Mire told the group about the Acadia Parish Library’s switch-over from the manual card catalog to computers, or O-Pac (Online Public Access Catalog). She gave a hands-on demonstration of how to locate books on the computer and took the club on a tour of the library.

After Mire’s program, committee reports were given and old and new business was discussed. Members expressed appreciation for the fine job Jackie Buescher had done in completing the yearbooks and getting them to members.

Following the meeting, those who were available met at Fezzo’s restaurant for lunch.