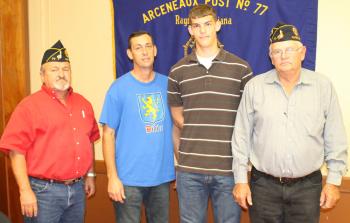 Brent Didier, along with his father, Leo Didier, was welcomed to the Oct. 8 meeting; at which time, he spoke about the week-long program he enjoyed.. Didier was sponsored for the program by Bank of Commerce. He thanked Post 77 and his sponsor for providing him the opportunity of attending Boys State and explained some of the interesting, fun and educational activities he enjoyed.

Also attending Boys State but not in attendance for the meeting were Michael Herpin, sponsored by Woodmen of the World, and Casey Breaux, sponsored by the Rayne Lions Club.

Post 77 Boys State Chairman Ray Olinger also thanked everyone who helped with the program, especially the committee members of Post 77.

Under the memorial report, it was acknowledged long-time Legionnaire Harris Sonnier passed away, thanking all legionnaires who attended his funeral on Sept. 16.

Robert Comeaux gave the building committee report stating the exhaust fans were changed out, along with the installation of flags at St. Joseph Cemetery #1 and #2. Plans have also been made to update flagpoles at other locations, as well.

Commander Gene Comeaux reminded everyone of the new monthly hamburger sales to begin at the Legion Home in November to attain operating funds. He also noted the new poker machines recently installed at the Legion Home have been making a small profit for the Legion’s general fund.

Commander Comeaux also reminded Legionnaires of the anticipated Veterans Memorial being planned by the city’s administration with the recommendation of Legionnaire Larry Guidry.

Reminders were given as follows: 7th District Conference slated Oct. 27th in Lake Charles; American Legion National Membership Team will be in Lake Charles Nov. 1-2 for a membership drive course; 7th District Christmas Party Dec. 1st with donations to be discussed; Annual Fishing Rodeo on Oct. 13 at the War Veterans Home in Jennings; and reminder to fly the flag at half mast on Dec. 7th of Pearl Harbor Day.

Commander Comeaux also advised the membership of the newest addition of plaques to the Legion Home, a new plaque donated by Lorraine Shelton-Gaines on behalf of the Shelton family. The plaque displays World War II soldiers who served from the Mire and Bosco area.