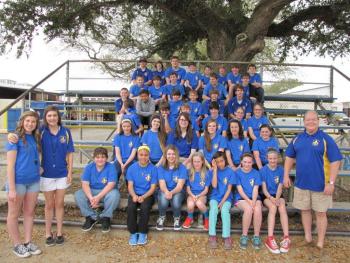 Members of the 2013-2014 Mire Elementary Scool Marching Band prepare for their May performance in Branson, Missouri, the first school band from Louisiana to be selected to perform in Branson.

The 2013-2014 Mire Marching Band is making history once again by performing in Branson, Missouri.

The Mire Marching Band has the distinction of being the first school band from Louisiana to be selected to perform in Branson.

The band will complete a performance with two different themes while in Branson, (1) Louisiana and (2) Patriotic. The band will play a New Orleans-style funeral procession and traditional second line.

The Mire Marching Band will be the first band in which Clay Cooper will actually come on stage and sing with as they play “Jambalaya.”

Other noteworthy performances by the Mire Marching Band have included:

- The Great Race in Crowley;

The band will present their Branson performance on Sunday, May 4, at the Rice City Theater in Crowley betwee 3-4:30 p.m. The public is invited and urged to attend. Admission is free.