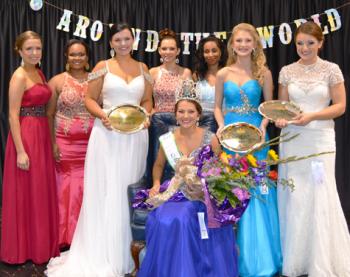 Complete with costumes and travel decor, “Around The World” was the theme Sunday afternoon as the Rayne Civic Center was the site for the 2016 Miss Rayne Pageant.
Crowned as the city’s new honoree was Castherine Elise Castille, 18-year-old daughter of Kendall and Annette Castille, who will represent the City of Rayne for the coming year.
Catherine received her crown from last year’s honoree, Victoria Richard, who has completed her year-long reign by representing the City of Rayne in a most regal manner for which she was presented the annual Miss Rayne scholarship by Suzette Leonards, event director. Mayor Charles “Chuck” Robichaux also presented Victoria with a personal check for $250 for her dedicated service to the City of Rayne while MIss Rayne.
Completing the presentations to the new Miss Rayne were Mayor Charles “Chuck” Robichaux, Suzette Leonards, Nikki Link and Angie Broussard.
A freshman at LSU-Eunice where she is majoring in radiology and specializing in ultrasound, Catherine is a 2016 graduate of Notre Dame High School and has recently completed her reign as Frog Derby Queen. She was sponsored for the pageant by the Rayne Lions Club.
Named 1st Runner-Up and given the opportunity to attend the International Rice Festival next month was Brooklyn Rena Mire, 17-year-old daughter of Mr. and Mrs. Jackie Prejean and Mr. and Mrs. Jody Mire. Brooklyn is a senior at Rayne High School and was spsonsored for the pageant by her parents. She was presented her award by Director Suzette Leonards and Dakota Henry (2009 Miss Rayne).
Corinne Juliet Doucet was named 2nd Runner-Up and was also given the option to attend the Miss Acadia Parish Pageant. She is the 17-year old daughter of Patrick and Desireé Doucet and is a senior at Notre Dame High School. She was sponsored for the pageant by her parents and was presented her awards by Rayne City Councilman Pete Babineaux and Angelle Hollingsworth (Miss Rayne 2008).
Blair Elizabeth Bergeron, 17-year-old daughter of Sarah and Eddie Bergeron, was named 3rd Maid. She is a freshman at UL-Lafayette where she is majoring in the nursing program. She was sponsored for the pageant by her parents and grandparents. Making her awards presentation were City Councilman Michael Doucet and Madison Vidal (MIss Rayne 2014).
Blair was also presented the People’s Choice Award during the pageant, awarded to the contestant as it is voted upon by the attending audience. She was presented the award by Taylor Hollier, Miss Rayne 2012.
Blair was also awarded the banner and silver tray as she was named Miss Congeniality, a prestigious honor voted upon by the contestants prior to the pageant. Making the presentation was Dakota Henry, Miss Rayne 2009.
Completing the list of the lovely Miss Rayne contestants were:
Meka Renee Cormier, 17-year-old daughter of JoAnn Cormier, sponsored by Vincent Enterprizes and Shake Back ENT;
LaShonda Nicolette Delco, 18-year-old daughter of Chandra Delco and the late Cleveland Hollir Sr., sponsored by her parents;
Breanna Rice, 17-year-old daughter of Emily Haure and Laura Pardee, sponsored by Cajun Fitness; and
Haylee Elaine Young, 17-year-old daughter of Mr. and Mrs. Harold Young, sponsored by the Ebonites Social and Civic Club of Rayne.
Serving as emcee for the event was Cheryl R. Boudreaux. Judges were Felicia Tucker, Michelle Peters and Veronica William.
A special remembrance was presented to the family members of the late William LeBlanc who served as Miss Rayne Historian for many years as a member of the Miss Rayne Committee. Accepting on behalf of the LeBlanc family were Grace Suiter and Barbara Richard. The 2016 pageant was formally dedicated in memory of LeBlanc.
In addition to the numerous special guests in attendance for the 85th annual event were a number of past Miss Rayne title holders, including Tessa Richard Fischler (1999), Jennifer James Autin (2001), Angelle Hollingsworth (2008), Dakota Henry (2009), Taylor Hollier (2012) and Madison Vidal (2014).
Committee members were Suzette Leonards director; Nikki Link, co-director; Angie Broussard, Dakota Henry, Josie Henry, Taylor Hollier, Paula Hollier, Kelsey Primeaux Lormand, Paulette Primeaux, Claire Trahan Meche and Tessa Richard Dischler.
Special thanks were expressed to the following for another successful Miss Rayne Pageant: City of Rayne for sponsoring the competition, DJ Phil Peltier for providing sound, Cheryl R. Boudreaux as emcee, Nikki Link with Project Dance for providing opening number, the Rayne Acadian-Tribune for coverage and announcements, the Rayne Lions Club who manned the concessions for the evening, the Rayne Chamber of Commerce for manning the door entries, and the many volunteers who helped to make the 85th Annual Miss Rayne Pageant a complete success.