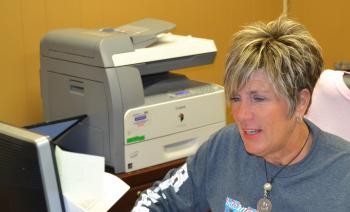 It’s only two weeks away.

The fact that the 77th version of the International Rice Festival is coming up so quickly has been lost on many residents of Crowley and Acadia Parish.

Not to those who have been working overtime at the International Rice Festival Office, however.

“People are starting to get excited,” said International Rice Festival Coordinator Roxie Viator, who can usually be found in her office holding two phones (one on each ear) during the weeks leading up to the festivities. “With the slight chill in the air lately, it seems as though people realize that the festival is approaching. Our T-shirt sales have really shot up in just the past few days.”

“I actually think that things are running as smoothly as they ever have,” said International Rice Festival Chairman Gene Williams. “This year, of course, will be different with the Southern University Band in town, but we’ve been talking with K.P. (Gibson, Crowley’s chief of police) and the sheriff’s office to make sure that we are well-prepared.”

The judging to see who will serve as the 77th annual International Rice Festival Queen will begin at 9:45 Saturday morning with the Jr. Prince and Princess judging beginning at 10 a.m. on Friday, Oct. 18.

This year’s festival will also include the regular events that draw thousands of visitors such as the Accordion and Fiddle Contest, The Rice Eating Contest and the Arts and Crafts Show.