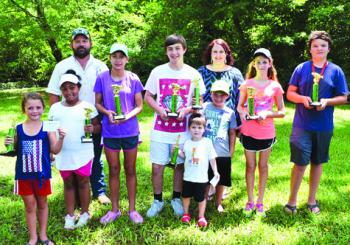 The fishing poles and rod-n-reels were out and about on Saturday, June 18, for the 2016 Annual Children’s Fishing Derby held by the City of Rayne on the grounds of Maison d’Memoire (Ken and Lynn Guidry) at 8450 Roberts Cove Road (Hwy. 98), just northwest of Rayne.
Joining the City of Rayne to host the 17th annual fun and family-orientated event were the Acadiana Sportman’s League, Rayne Lions Club, National Wild Turkey Federation, and Maison d’Memoire.
Fishing was enjoyed between the hours of 8:30 - 11:30 a.m., and was immediately followed by awards for largest fish and most fish caught b the participants.
This catch and release fishing event was held for children up to 15 years of age with children accompanied by an adult for the morning program.
A light lunch was provided by the Rayne Lions Club to those enjoying the day’s activities, along with refreshments throughout the day.
Prizes were awarded at the end of the fishing tournament to the following:
Most Fish (0-5 years): Isabella Reiners with 13
Biggest Fish (0-5 years): John Guidry at 1.81 pounds
Most Fish (6-8 years): Demari Savoy with 11
Biggest Fish (6-8 years): Aiden Maloney at 1.80 pounds
Most Fish (9-12 years): Mackenzie Olinger with 10
Biggest Fish (9-12 years): Charlotte Doucet at 1.15 pounds
Most Fish (13-15 years): Andrew Credeur with 2
Biggest Fish (13-15 years): Austin Lagrange at 1.22 pounds
Overall Winners: Most Fish - Isabella Reiners with 13 fish; Biggest Fish - John Guidry with a 1.81 pound bass.
Awards were presented by Suzette Leonards - City of Rayne, and Dee DeRouen - Acadiana Sportsmen’s League.
Special thanks are expressed to the many volunteers, donors and participants for yet another successful Children’s Fishing Derby.