In the darkest times, a light shone

(File photo) The Crowley Fire Department and other community members help prepare plates of jambalaya for the evacuees staying in Crowley at the fire station. 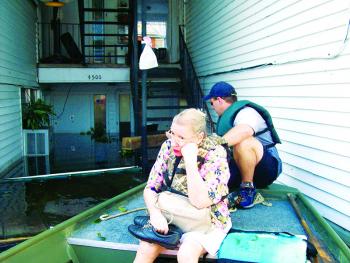 (File photo) Brandon Prudhomme, right, pushes the boat out after rescuing an elderly lady from her second-story apartment in New Orleans.