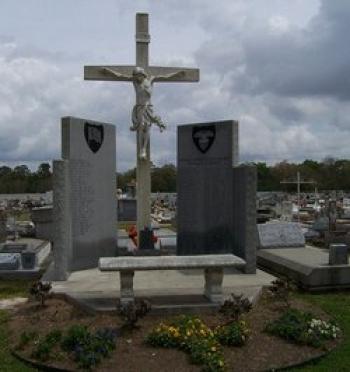 The Estherwood Memorial Cemetery Association will honor all United States veterans — living and deceased — during a service on Sunday, Nov. 10. The service, beginning at 9:30 a.m. in the Estherwood Cemetery, coincides with the country’s Veterans Day holiday.

This year the Association also will honor three Acadia Parish veterans who were killed in action.

Following the ceremony, a breakfast will be held at the Knights of Columbus Home in Estherwood.

All veterans, their families and the public are encouraged to attend.

The Estherwood Veterans Day ceremony is possibly the most well-known in Acadia Parish. Sandy Maples, who stopped by the Post-Signal office on Wednesday, said that the memorial was started by Lovanna Lege in the early 1980s.

The Acadia Parish veterans that will be honored during next Sunday’s service are:

• Wilson Mark Meche of Estherwood. Meche died in Korea on Oct. 6, 1952. He was a Private First Class in the United States Marine Corps.

He was 21 when he was killed while fighting the enemy in Korea.

• Paul H. Myers, whose home was listed simply as Acadia Parish. Myers died in Korea on Sept. 7, 1951. He was a Corporal in the United States Army.

He was was 24 years old when he was killed in action in Korea.

• William C. Quebodeaux Jr. of Crowley. Quebodeaux died in South Vietnam on Feb. 3, 1968. He was a Private First Class in the United States Army.

Quebodeaux was 19 when he was killed in South Vietnam.