Grades up in Acadia Parish 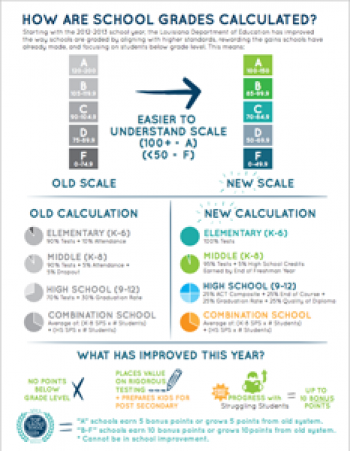 BATON ROUGE – A new formula and hard work are netting big results in Louisiana education, and Acadia Parish is no exception.

The Department of Education announced School Performance Scores (SPS) for the 2012-2013 school year, the first under a new system of scoring meant to simplify the scoring formula and raise standards for student achievement.

Under the new formula, letter grades are assigned on a simple scale — scores at or above 100 earn an “A”and scores below 50 earn an “F.”

• Focus on students below grade level. A “bonus”system was created that rewards schools making great progress with persistently low-performing students both on state assessments at the elementary and middle school levels, and the ACT at the high school level.

Letter grade outcomes improved overall for the 2012-2013 school year because of record-setting student achievement: 71 percent of students tested at Basic or above this year in ELA and math, graduation rates are at an all-time high, a record number of students earned college-entry ACT scores this year, and Louisiana students increased their AP participation more than any other state.

As a result, Louisiana has more A and B schools than ever before, with 14 percent of the state’s public schools receiving an A, and 29 percent receiving a B.

The number of failing schools is at an all-time low, decreasing from 12 percent to 8 percent.

For Acadia Parish, the numbers are roughly on pace with the state with some scores higher than state average, some below.

Bourque also added that 13 schools improved a letter grade this year and nine of the parish’s schools earned the distinction of being identified as a “Top Gain”school by the Louisiana Department of Education based upon these schools exceeding their projected growth.

“It is through the effort and teamwork of the entire learning community that student achievement can be improved. Communities that are successful in education are successful in providing the proper resources for their students,” Bourque said.

“The on-going financial support from tax payers of Acadia Parish has allowed the school district to hire and retain certified teachers and administrators who can provide a quality education to all studentsm” he added. “We appreciate and commend the efforts of all stakeholders who are working together as a team to achieve positive results.”

The new system saw three schools flourish with an A and no schools grade an F. Earning an A were Egan, Mermentau and Richard elementary schools. The three account for 11.5 percent of Acadia Parish schools.

“With a record number of students showing improvement on state tests and a record number of schools earning an ‘A’ grade, the results are certainly very encouraging,”said BESE President Chas Roemer. “It is a testament to the efforts of students and teachers that these gains were achieved according to the new higher performance standards.”

Information about School Performance Score (SPS) for schools, school districts, and the State of Louisiana can be viewed at the Louisiana Department of Education’s web site, www.louisianaschools.net.