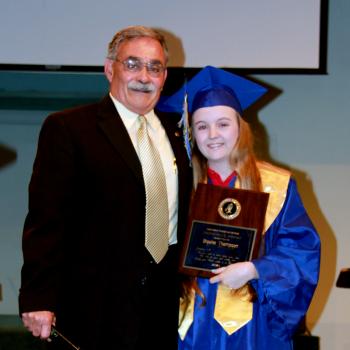 Jeannine LeJeune is the online editor for the Crowley Post-Signal. She can be reached at jeannine.lejeune@crowleytoday.com or 337-783-3450.

In a special afternoon ceremony, 15 seniors from Northside Christian School became graduates of their school and were set to embark on the next chapter of their lives.
The ceremony was filled with prayerful hopes, blessings and awards and the personalities of the 15 graduates was on display from the onset.
Prior to the ceremony, as well as when each graduate entered, pictures of the graduates then and now were shown on the screen along with inspirational quotes from the likes of C.S. Lewis and Carl Sagan as well as other characters like Pink Floyd, John Cena and even, One Tree Hill.
As the ceremony began, Pastor of Northside Assembly of God Ryan Post happily welcomed all in attendance to a bittersweet moment for not only the graduates, but for the faculty and staff of the church and school. He jokingly added that if any of the graduates wanted, he could arrange their return for one more year.
The group’s impact on the school was applauded multiple times through the ceremony, not only by Post, but by Northside Christian School Principal Randy Trahan, who, had spent up to 13 years with some of the graduates through Bible study and more and told the graduates, whom he affectionately called “kiddos,” that it had been his honor and privilege to spend time weekly with them through Bible class.
The ceremony also saw Rev. Glen Howie of Mowata Baptist Church deliver the commencement address to the students. Howie served in two capacities at the event as he was also the father of one of those who would be awarded a diploma Sunday.
Howie referenced the Bible multiple times in his address as he called upon the graduates to be listeners throughout their life’s journey, specifically a listener to God in the sea of voices that look to guide them moving forward.
“There will be all kinds of people trying to tell you what to do, but in the midst of all those voices, listen for God,” he said.
“Go from where you are to where he is telling you.
He also beckoned the students to remember God always because God loves each and every one of them.
Following the speech, Trahan called upon several special guests to help him honor members of the graduating class. First, he announced the five honor graduates as based upon the standards laid forth by the Board of Regents. Of Northside Christian’s 15 graduates, five were bestowed the honor: Anna Atkinson, Abigail Howie, Delaney Rivera, Taylor Thibodeaux and Brooke Thompson.
Amongst the scholarships the American Legion Award was presented by Mike McBride to Nicholas Martin and Thompson. It was also announced that Thompson was awarded the Daughters of the American Revolution Good Citizens Award.
Special scholarships were awarded to the following individuals:
• Thompson: National Beta Club, Crowley Solitic Club and two scholarships from LSU Eunice.
• Thibodeaux: Crowley Kiwanis Club
• Rivera: Rotary Club of Crowley
• Madisyn Clement: Crowley Lions Club Albert Zock Memorial and Acadia Bar Association
• Sydni Guidry: Acadia General Hospital Pink Ladies Auxiliary
• Martin: Pat Stanford Legacy and scholarship to the University of Louisiana at Lafayette.
As a part of the Association of Christian Schools International, Northside Christian School is able to designate seniors in either athletics, academics, fine arts, leadership or Christian service as Distinguished Christians. Awarded those honors were Bradley Ancelet (athletics), Atkinson (academics), Clement (athletics), Guidry (athletics), Howie (academics, leadership and Christian service), Martin (fine arts and athletics), Rivera (academics and Christian service), Thibodeaux (academics and leadership), Thompson (academics, leadership, fine arts and Christian service) and Ty Wilson (athletics).
This year’s class saw three 4.0 graduates, all of which were afforded time to speak to the graduation attendees and presented plaques commemorating their achievement. The trio of 4.0 graduates – Howie, Rivera and Thompson – each addressed their family, friends, classmates and Northside Christian’s teachers and offered hearty thanks and appreciation for their support as well as offering words of encouragement moving forward.
“Our bond with each other will last a lifetime,” said Howie of her classmates. “I will always think of us as a dysfunctional family.
“As we make the transition from this tiny campus to a world full of possibilities, may we always be willing to do our best to achieve our goals and never fear the failure that may come.”
When Rivera took the podium, she made sure to direct her comments to each person or group, turning finally to her classmates as well.
“As our senior song says, ‘This Is Not The End’,” said Rivera. “I wish you blessings and much success wherever your future leads you and I encourage you to not forget what you’ve learned here, academically and spiritually.”
Thompson, who had prepared a lengthy speech opted to go off the cuff and “skip around.” But, like the two who spoke prior, her message to her classmates offered encouragement.
“There’s this scripture in Numbers – which is not exactly the most fun book of the Bible to read – but, it’s a blessing,” she said. “I feel like this blessing is fitting for us, too, and I just wanted to leave it with my class.
“‘The Lord bless you and keep you;/The Lord make his face shine on you and be gracious to you;/The Lord turn his face toward you and give you peace.’”
Thompson would receive one more accolade before the award’s portion of the program concluded. Trahan would present her the Principal’s Award during ceremony, referencing her light.
Finally, Trahan would hand each graduate his or her diploma as Post would read their names aloud. Presented diplomas Sunday were Bradley James Ancelet, Anna Marie Atkinson, Bradley Justin Breaux, Madisyn Rhen Clement, Coleby Curtis Cormier, Sydni Claire Guidry, Anna Marie Guillory, Jonathan James Hermann, Abigail Peggy Howie, Nicholas Shane Martin, Christian Lee Nugent, Delaney Shea Rivera, Taylor Nicole Thibodeaux, Brooke Elizabeth Thompson and Ty William Wilson.