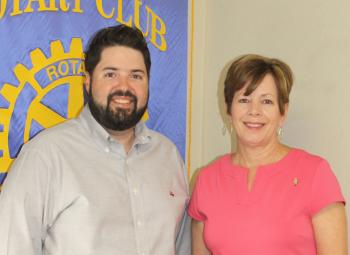 (Written by Paul Kedinger, managing editor of The Rayne-Acadian Tribune)

Though the predominately Republican House has voted 41 times to kill the Affordable Care Act, Americans must begin the process of signing up for health insurance coverage on Oct. 1, emphasized insurance agent Lyle Leleux Thursday morning as she described to Rotarians some of decisions facing U.S. residents.

The initial sign-up period for enrollment in a qualified health plan runs through Dec. 15 to become effective January 1, 2014. If an uninsured person enrolls through the Health Insurance Marketplace, also known as health insurance exchange,  after Dec. 15, the insurance coverage will begin the first day of the following month.

The initial sign-up period will end March 31. Other enrollment periods are provided for those who have a life change, including the loss of a job, marriage or birth of a child.

Individual can also consult with any health care insurance agent.

When an uninsured person uses the marketplace option, they may qualify for a tax credit subsidy to lower the cost of monthly premiums based on their income and family size.

If an individual has health coverage from an employer that meets certain standards, he or she will not be eligible for a tax credit through he Marketplace. However, if the cost of employer health insurance is more than 9.5 percent of a person’s year’s household income or doesn’t meet minimum standards set by Obamacare (the Affordable Care Act), they may be eligible for a tax credit.

However, if a person opts for coverage through the Marketplace, they may lose the employer contribution, if any, to the employer-offered coverage.

An individual who does not obtain health insurance coverage will also face a penalty in 2015. The first-year penalty will be $95, $395 in the second year and $695 in the third year of no health plan. The penalty will be enforced by the IRS.

Leleux intimated the penalties imposed on individuals without health coverage would encourage young people, many who currently do not have a health policy, to obtain coverage.

Because Gov. Bobby Jindal chose not to establish a state marketplace system, residents will make application to a federal health exchange.

Under the Affordable Care Act, insurance policies must cover all existing medical conditions.

Enrollment in the health insurance exchange can be submitted by phone, mail, in person and online. (HealthCare.gov)With the information, you supply regarding family and income (estimated for 2014 or 2013 adjusted gross income) the marketplace will verify eligibility, tax credits and cost-sharing reductions.

When estimating income, people will be asked to add up wages, salaries, tips, net income form any self-employment or business, unemployment compensation and Social Security payments. Other kinds of income, such as rental income, interest, dividends, capital gains, annuities, alimony and some retirement and pensions.

Eligible consumers will be able to compare health coverage and   policies to make an informed health plan choice.