One dead in two-car accident 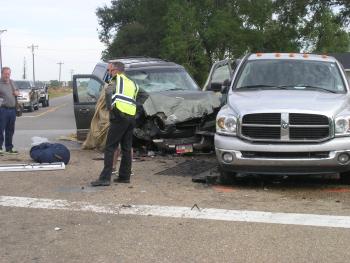 According to investigating troopers, at 7:50 a.m., 57-year-old Gary Daigle of Church Point, was driving a 2007 Dodge truck west on La. Highway 100 approaching La. Highway 91. A 2004 Ford SUV, driven by 55-year-old Elizabeth Scott of Iota, was traveling east on La. Highway 100 approaching Daigle. For reasons still under investigation, Daigle turned left into the path of Scott’s vehicle, and struck her passenger side. Daigle was not restrained and was not injured in the crash. Scott was restrained and was transported to a local hospital with moderate injuries.  A passenger in her vehicle, 82-year-old Gloria Pousson of Lake Arthur, was restrained but sustained fatal injuries. She was pronounced dead at the scene by the Acadia Parish Coroner.

It is unknown if impairment was a factor in the crash; however, troopers have obtained toxicology samples and they will be submitted to the State Police Crime Lab for analysis.

This crash remains under investigation.

Last year, 62 percent of the fatal crashes investigated by Troop I involved some form of impairment.  While results are still pending in this crash, Troopers remind drivers about the dangers of impaired driving.  Even after having just one drink, decision making abilities are hindered.  Make the responsible decision every time, don’t drink and drive.