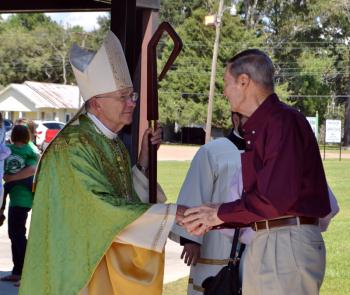 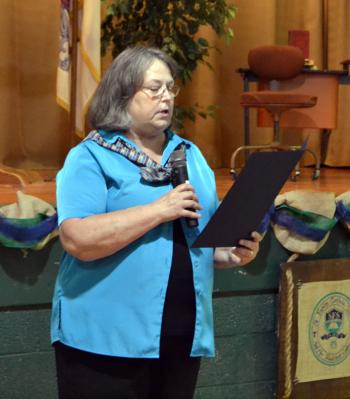 Whether it was Bishop J. Douglas Deshotel, a Basile native, joking about being in the big city or the numerous attendees reflecting on St. Francis’ past, the school celebrated its centennial Sunday with much laughter and excitement.
Events started at 11 a.m. with a special eucharistic and celebratory Mass led by Deshotel. There, Deshotel’s message was one of congratulations to the school and its community for their faith and one of mercy.
“I’m honored to be with you all this morning, it’s a great treat to be able to come to the big city,” he said. “When you’re from Basile, Iota is the big city.”
The Mass, held at St. Joseph Catholic Church in Iota, saw the church filled to capacity, with extra fold out-seats filled and still many more people standing.
Following Mass, the large group made their way toward St. Francis School for a reception with many presentations.
First, Iota Mayor Julia “Mariette” Granger was pleased to read a special Louisiana Senate Resolution, penned by Sen. Dan W. “Blade” Morrish.
Anne Ritter, committee chairperson, presented a copy of the school’s new cookbook to three sisters from the Sisters of Divine Providence, which is celebrating its 150th year this year. The cookbook, which is dedicated to the Sisters of Divine Providence, reads as follows:
“Tradition is the cord that binds generation to generation. This cookbook is dedicated to the Sisters of Divine Providence, celebrating its 150th anniversary as well as all of our St. Francis family – past, present and future.”
Ritter also pointed out the graduates from throughout the decades on hand, including one as far back as the Class of 1936 as well as a family that is now in its fifth generation of attending the school.
Principal Mike Darbonne also made it a point to recognize members of the school’s faculty and staff on hand Sunday, both current and past. All were welcomed with a hearty applause.
As attendees got situated in the gym, Darbonne reminded them that jambalaya plates were on sale in the school cafeteria and that the classrooms had been transformed into time capsules of sorts with plenty of nostalgia.
It was in those classrooms that some of the truest gems were found.
There were, of course, the atypical finds – class pictures, yearbooks, football programs, etc. – but there were also things that many could only dream of unearthing in those classrooms and the library. There were also old sports uniforms and lettermen jackets that dated back to the ’50s and ’60s and, perhaps, the best find, lesson plans and school ledgers from 1916, the year the school opened, written in that old and beloved “teacher-y” handwriting, as pointed out by onlookers.
“One hundred years ago today, St. Francis School opened its doors with 163 students ... the little school in the middle of the rice fields,” said Darbonne. “Here it is, 100 years later, and St. Francis remains steadfast and is still the little school in the middle of the rice fields.”
And, by all indicators, those within the St. Francis School family, that is a blessing.