Next step to a world championship 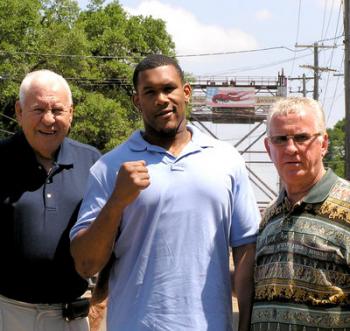 Parish interests work to get a match for St. Martinville fighter

Breaux Bridge — “Lethal” Johnnie White — whose moniker belies his affable personality but fits his amazing 18-0 record with 16 knock-outs to a T — is on the path to an undisputed world championship.

“When you’re 18 and oh, they don’t want to fight you,” said White’s manager, Phil Daley, a Lake Charles gym owner with over 50 years in the fight game.

A student at McNeese State University, White was a football player at St. Martinville High like his famous cousin, Early Doucet. He had long been interested in boxing but there was no way to pursue it in St. Martinville.

Daley says he saw the mark of a champion when White walked into Daley’s Boxing Studio.

“I’ve managed 13 world contenders,” he said. “I know what I’m talking about here.”

Daley, who is promoter as well as a manager and trainer, knows what the fix is: money. Make it worth the while of an opponent with a name to step into the ring with the young juggernaut.

Some investors around Acadiana are willing to step up to get White a match at Blackham Coliseum in Lafayette with mixed martial arts on the card and VIP tables with white linen and crystal.

Breaux Bridge businessman Johnny Raymond, a recent appointee to the Louisiana Boxing and Wrestling Commission, is using his connections to try to make it happen sometime this summer.

Acadiana is one of the best venues in the state for boxing, Raymond noted.