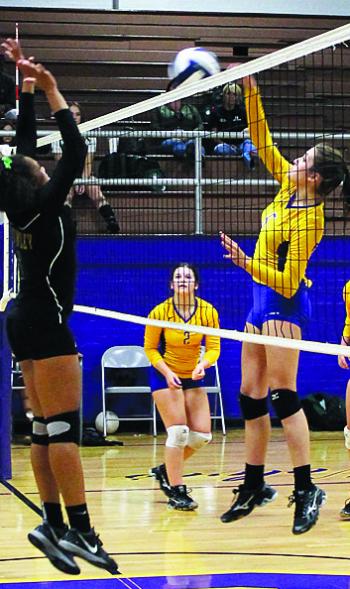 UP FOR KILL - Emma Pastor goes up for a kill during Rayne HIgh volleyball action. The Lady Wolves will host Northwest High today (Thursday) during a district contest. Pastor recorded 16 kills during the win. (Acadian-Tribune Photo by Lisa Soileaux)

The Lady Wolves Volleyball Team began their district slate on Wednesday, Sept. 21, with a five-set win over Crowley High.
The Lady Wolves claimed the first two sets of play, but Crowley rallied back for the next two sets, forcing a tie-beaker in the fifth and final set that Rayne won handily, 15-6.
Center hitter Emma Pastor led Rayne kills with 16, along with 2 digs.
Teammate Kendal Edmond recorded 9 kills while Destini Carrier had 7 kills, 5 digs and an ace.
Leading in assists were Whitney Comeaux with 16 and Tajané Butler at 12 along with a kill and dig.
Back row play was led by Madison Lavergne with 8 digs and 3 by Trinity Axtell.
During earlier action on MOnday, the Lady Wolves fell to Sam Houston in three straight sets, (7-25, 14-25, 22-25).
Setting up the Rayne offense were Whitney Comeaux with 7 assists, Destini Carrier with 4 and Tajané Butler with 3. Carrier also recorded 4 kills.
A limited offense saw kills by Savanna LaCombe (4), Destiny Alleman (3), Emma Pastor (2) and singles by Kendal Edmond and Tiesha Young.
Madison Lavergne again led backrow play with 8 digs.
The Lady Wolves were scheduled to host Breaix Bridge this week during a non-district contest, following by district play on Thursday when they host Northwest High. Rayne will hit the road next week when they travel to Eunice on Tuesday and Church Point on Thursday for additional district matchups.