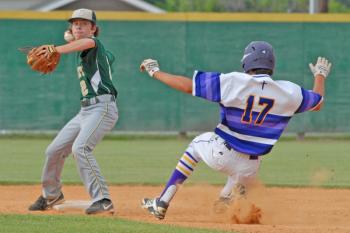 OPELOUSAS – Crowley High coach Christian Doughty knew that his team’s regular-season finale against Opelousas Catholic would be a big one.
He didn’t realize, however, just how big it would end up being.
The Gents jumped out to an early 3-0 lead and held off the Vikings in the final frames to slip away with a 9-7 road victory.
The significance of that victory was huge, vaulting the Gents from a No. 21 power ranking a week ago to the No. 15 seed and giving them a first-round home playoff game against No. 18 Assumption.
That game will be on Friday at Miller Stadium. First pitch is set for 6 p.m.
“We knew this was a crucial game for us, but the thought of us moving from 21 to 15 was quite a shocker,” said Doughty on Tuesday when the brackets were released. “It was a pleasant surprise. We went from thinking we were probably heading to Northwood of Shreveport for the first round to now hosting; it sure is a nice change.”
The Gents’ victory Monday was sparked by an offensive attack that was highlighted by Christian Breaux’s 3-for-4 performance that included a double and three RBI.
“Christian needed that today,” said Doughty of Breaux’s offensive production. “He had been struggling a little bit, but he is working hard and he did come up big today.”
Also producing in the lower half of the lineup for the Gents was Andre Larry with a double. Bubba Daigle and Brett Hebert each had a single.
“That’s definitely a positive when our lower half of the lineup is swinging it well,” said Doughty.
Mackay Mouton and Alex Ashby paced the top of the lineup with two hits each. Mouton tripled and drove in one run while Ashby had a triple, a double and two RBI.
Mouton also threw the first 2 1/3 innings and gave up two runs on two hits and two walks while striking out three.
“Mackay had a good day,” said Doughty. “He ran into a little trouble in the third inning, but overall I thought his first two innings were excellent.”
The Gents did, however, have a handful of errors that allowed the Vikings to remain in the game. An error on a relay from the outfield led to a run scoring in the third inning while a dropped fly, also in the outfield, led to another run crossing the plate in the fifth.
The Vikings also pushed across a run in the sixth inning on a sacrifice fly in the infield and another error was committed in the final frame.
“I’m disappointed in the way we played defensively, especially going into the playoffs,” said Doughty. “When you have to score nine runs, and thank goodness it was just enough, that’s disappointing.
“We had at least four miscues defensively that cost us and we have to correct that before the playoffs or we won’t have a shot at winning.”
The Gents pushed across three runs in the third inning courtesy of two hits, two errors and a walk by the Tigers.
Kaleb Istre drew a walk to start the frame before Larry reached base on an error in the outfield. The runners moved up on a sacrifice bunt by Pate Broussard before both scored on an errant throw. The final run of the inning crossed the plate on Ashby’s double to left field.
The Gents added three more runs in the fourth on a squeeze bunt by Daigle, an RBI triple by Ashby and an RBI single by Mouton.
Larry doubled and scored on a wild pitch in the sixth inning and Breaux singled in two runs in the seventh.
Daigle pitched 2 2/3 innings in relief and surrendered four runs on three hits and two walks before giving way to Ben Broussard in the middle of the sixth. Broussard allowed one run on two hits. He struck out three in 1 2/3 innings