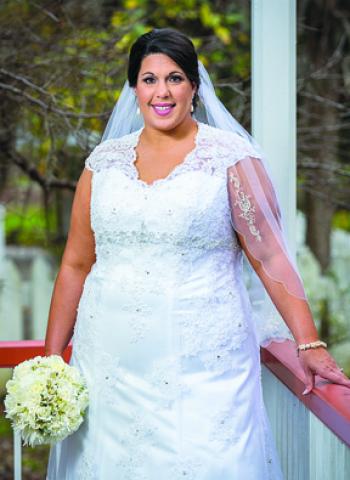 Aimee Nicole Guidroz and Brodie John Savoie became husband and wife during a Nuptial Mass celebrating the Sacrament of Holy Matrimony on Friday, April 8, 2016 at seven o’clock in the evening at St. Landry Catholic Church in Opelousas.
Reverend Garrett Savoie, brother of the groom, officiated the ceremony, assisted by Reverend James Brady, Reverend Michael Arnaud, and Reverend Andre Metrejean.
The bride is the daughter of Steve and JoAnne Guidroz of Opelousas. She is the granddaughter of Priscilla Guidroz of Opelousas, the late John Guidroz, and the late Halton and Lois Mizzi.
The groom is the son of Brian and Melissa Savoie of Mire. He is the grandson of Rogers and Betty Doucet of Church Point, Nola Savoie of Mire and the late Frank Savoie.
Given in marriage by her father, Aimee wore an elegant white a-line satin gown with a delicate lace overlay. The gown featured a hand-beaded empire waist, illusion lace back and a chapel length train. Her headpiece was a fingertip veil of white tulle trimmed with pearl beading. She carried a bouquet of white akito roses, white alstroemerias, and vanilla cream petite roses wrapped in white lace ribbon with a French knot and pearl accents. The bride’s bouquet was entwined with the rosary of her late maternal grandmother, Lois Mizzi.
Sarah Mire, sister of the bride, served as matron of honor. Bridesmaids were Cameron Carriere, Natalie Stout, Celeste Stout, Dana Carlin, Emily Smith and Casey Roberts, friends of the bride.
Andrew Mire, friend of the groom, served as best man. Groomsmen were Matthew Bellard, Dustin Roberts, Blake Domec, Rocky Menard, Josh Prevost, friends of the groom, and Wesley Guidroz, brother of the bride. The groom’s godchild, Gavin Benoit, was the ring bearer.
Ushers were Derek Mire, brother-in-law of the bride, and John (Pye) Savoie, cousin of the groom.
Tricia Guidroz, aunt of the bride, and Pam Benoit, aunt of the groom, presented the scriptural readings.
Offertory gifts were presented by Donna Thibodeaux, godmother of the bride, and Jay and Melanie Richard, godparents of the groom.
Following the wedding ceremony, a reception was held at the Wolff Hall in Washington.
On the evening preceding the wedding ceremony, a rehearsal dinner was held at Café Josephine in Sunset.
Upon returning from a honeymoon to St. Lucia, Carribean Islands, the couple will reside in Lafayette.