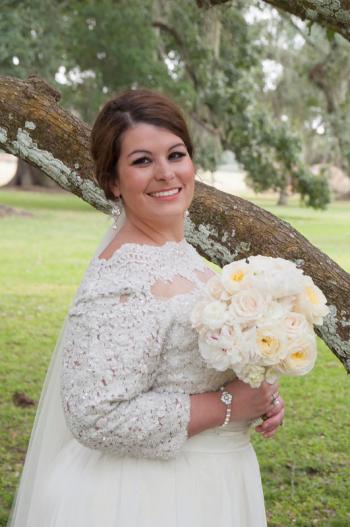 Elise Marie Puissegur of Lafayette and Cody Ewing Dearien of Baton Rouge were joined as husband and wife on the afternoon of Saturday, Feb. 7.

The bride is the daughter of Michelle and Robert Puissegur of Crowley She is the granddaughter of Beverly and John E. Hains, and of William Puissegur and the late Antoinette Puissegur, all of Crowley.

Elise graduated from the Academy of the Sacred Heart in 2002 before attending Tulane University, where she was a member of Chi Omega Sorority, graduating with a bachelor’s degree in neuroscience in 2006. She went on to earn a Doctor of Dental Surgery degree from the LSU School of Dentistry in New Orleans, where she was inducted into Kells Honor Society,  in 2012. She is currently an associate dentist at Puissegur Family Dentistry in Lafayette.

The groom is the son of Arlene and David Dearien and the grandson of the late Wanda Jean and J.C. Dearien, all of Sulphur.

Guests were ushered to their seats by John Cabot Russell, godchild of the bride; Jeremy Puissegur, cousin of the bride; and Drew Verret, friend of the groom.

Music for the ceremony was provided by vocalists Tina Reaux and Ricky and Dennis Guidry, cousins of the bride; trumpeter Will Green; organist Susan Comeaux; and violinist Tommy Benoit.

Selections included “Always Be a Child,” Canon in D,” “Trumpet Voluntary,” “Set Me Like a Seal,” “Ave Maria” and “Allegro Maestoso.”

Escorted to the altar by her father, the bride was beautiful in a custom-made full length gown of ivory chiffon and beaded re-embroidered Alençon lace. The bateau neckline and three quarter sleeved beaded lace bodice were accented with a silk peau de soie cummerbund. The gown was finished with a chapel length train that perfectly complemented the slightly gathered chiffon skirt.

A chapel length veil of French tulle fully edged with galloon lace and fashioned with a custom ivory headpiece completed the bride’s ensemble.

Beth Brittingham, a college friend and sorority sister of the bride, served as matron of honor.

Serving as bridesmaids were Mallory Gaspard, cousin of the bride; and Holly Bouffine, Alexis Ashbey and Mandi Short, all friends of the bride.

The attendants wore floor length black dresses in varying styles individually selected by each bridesmaid, and they carried smaller versions of the bride’s bouquet.

The groom selected his brother, Chad Dearien, to serve as his best man.

Standing as groomsmen were Matthew Gaspard and Ricky Truax, friends of the groom, and Drew Puissegur and Jordan Puissegur, brothers of the bride.

Allison Dearien, niece of the groom, and Kourtney Hebert, cousin of the bride, shared the duties of flower girl, while Garrett Hebert, godchild of the bride, served as ring bearer.

For her daughter’s wedding, the mother of the bride, the former Michelle M.Hains, selected a smoke grey chiffon A-line dress with hand-beaded illusion three quarter length sleeves. Featuring a V-neckline and beaded bodice with a ruched empire waist and center beaded accent piece, the dress was finished with a soft, gathered skirt.

The mother of the groom, the former Arlene F. Landry, chose an aubergine V-neck gown with a ruched mesh overlay, sheer three quarter length sleeves and a gathered waist anchored by a beaded floral embellishment.

Following the wedding, family and friends joined the couple at a reception held at Wolff Ballroom in Washington.

The ballroom provided a beautiful romantic setting, with glowing chandeliers and lights in sheer fabric draped across the tall wooden beams at the ceiling.

Guest tables were topped with glass vases filled with hydrangeas and decorative branches along with photographs of the couple.

Music was provided by the band Nik-L-Beer and guests joined the couple for a traditional New Orleans second line.

The first and third tiers of the bride’s three-tiered cake were decorated with ivory ruffles, while the smooth middle layer was adorned with the new couple’s initials. The confection featured white cake with strawberry and cream filling and almond-flavored cake with amaretto filling. It was adorned with fresh hydrangeas and garden roses.

The cake included pulls, a Southern tradition, for the bride’s closest friends and was served by her godmother, Mona Cunningham.

In place of cake, the groom opted for shot glasses filled with Kahlua and Bailey’s Irish Cream and topped with chocolate and red velvet cake balls decorated with LSU accents. They were served by the groom’s sister-in-law Erica Dearien.

Out-of-town guests at the wedding traveled from Connecticut, Florida, New York, Texas, Virginia and throughout Louisiana.

On the evening prior to the wedding, the groom’s parents hosted a rehearsal dinner at Prejean’s restaurant, where guests enjoyed traditional Louisiana dishes.

The couple will reside in Lafayette.