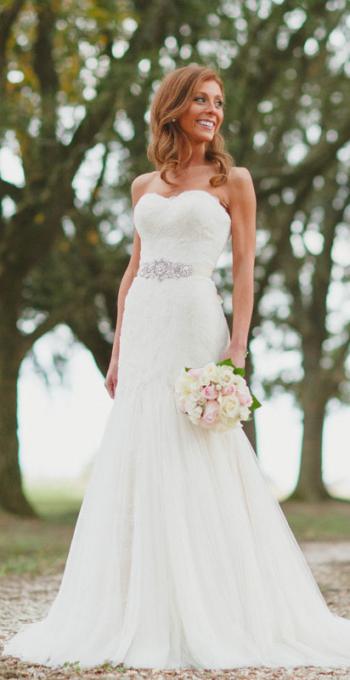 CHURCH POINT - Catherine Brooke David of Lake Charles and Michael Charles Hundley Jr. of Mowata were joined in holy matrimony on the evening of Saturday, Dec. 6, 2014, at Our Lady of the Sacred Heart Catholic Church in Church Point.

The bride is the daughter of Janet Francois Moring of Carencro and Guy Matthew David Sr. of Houston, Texas. She is the granddaughter of Mr. and Mrs. Herman Francois of Eunice, and of Mr. John W. David Sr. of Church Point and the late Mrs. Mildred Daigle David.

Brooke graduated from Notre Dame High School of Acadia Parish in 2006 before earning a bachelor’s degree in political science from McNeese State University in Lake Charles. She is currently employed by the United States Senate and serves as the Southwest Regional representative for U.S. Sen. David Vitter.

Michael is a 2006 graduate of Notre Dame High School of Acadia Parish and is currently engaged in farming.

Escorted to the altar by her father, the bride was gorgeous in a full length fit and flare gown featuring a strapless sweetheart neckline and dropped waist. The chantilly lace and tulle bodice flowed effortlessly into a silk chiffon skirt, and the dress was finished with lace-covered buttons down the back and a hand-beaded crystal sash at the waist.

The bride’s sister, Mary David Kasischke, served as matron of honor. Attending Brooke as bridesmaids were Mary Helen Hundley and Ann Katherine Hundley, sisters of the groom; Jennifer Boudreaux and Tiffany Beaugh, cousins of the bride; and Dayna Guidry, Margaret Hundley and Anne Leonards, friends of the bride.

Drea Matte and Madison Boudreaux, both cousins of the bride, served as flower girls.

Music for the ceremony was performed on trumpet, violin and organ, with Will Green serving as the trumpeter.

Offertory gifts were presented by the mothers of the bride and groom.

After the ceremony, family and friends joined the couple for a reception held at the Grand Opera House in Crowley.

On the Wednesday evening prior to the wedding the parents of the groom hosted a rehearsal dinner at La Fonda restaurant in Lafayette.

Following a wedding trip to Bora Bora and Tahiti, the newlywed couple presently lives in Mowata.