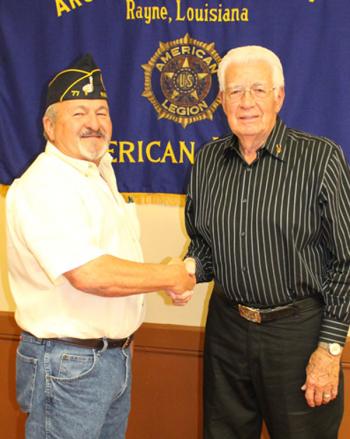 During the November meeting of Arceneaux Post 77, American Legion, just prior to the 2013 observance of Veterans Day, local and area Purple Heart honorees were acknowledged, both living and deceased.

Commander Gene Comeaux welcomed CJ Melancon, the lone Purple Heart recipient of World War II (U.S. Army) in attendance for the meeting who is also a member of Post 77.

Douglas Sicat was welcomed as a new member of Post 77.

The membership also voted to not award the annual Legion scholarship this year due to limited funds of Post 77 at this time. The subject will be reviewed once bingo is restored to Post 77 in 2014.

Service Officer Al Leger announced plans of the VA to switch all claims to paperless.

Commander Gene Comeaux reminded everyone of the monthly hamburger sales which began in October at the Legion Home in November to attain operating funds. He also gave a report of the new poker machines recently installed at the Legion Home.

Commander Comeaux also reminded Legionnaires of the anticipated Veterans Memorial being planned by the city’s administration with the recommendation of Legionnaire Larry Guidry. He also invited legionnaires to attend the many Veterans Day programs and ceremonies planned at local and area schools and churches. He also invited legionnaires to help judged the annual door decoration contest held at Rayne High School prior to their annual Veterans Day program.

An invitation was extended by Ray Olinger of the upcoming documentary on World War II to be held at St. Leo Catholic Church Parish Hall beginning on Veterans Day.

With no further business, the meeting was adjourned with Legionnaires and guests then enjoying a delicious meal prepared by the Legion cooks.