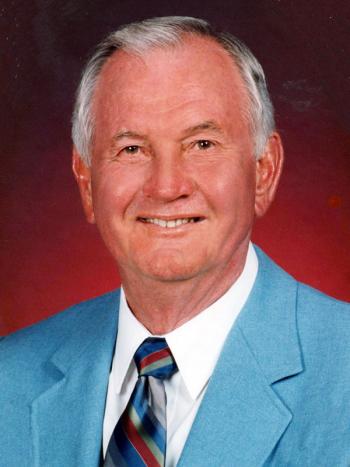 Entombment will follow in Mowata at the St. Lawrence Mausoleum. The Rev. Louis Richard, pastor of Sacred Heart Church in Broussard, will officiate.

Raymond was born July 22, 1932, in Branch. A successful, self-made businessman, he was known for his love of his family, his church and the city of Crowley — and baseball!

A member of the Crowley Millers minor league baseball team in 1950 and 1951, Raymond was an up-and-coming pitcher for the team and was traded to a team in Tampa Bay. However, he didn’t accept the offer.

A pretty girl named Kitty had caught his eye. They soon married, and he stepped out of professional baseball and into his career in the rice industry.

Raymond was first employed by the late C.J. Freeland at the American Rice Mill. Here he learned rice grading and buying. In 1955, he was hired by his mentor, the late A.B. Dore Jr., at Dore Rice Mill, as a rough rice buyer. He remained there for 27 years.

While still employed by Dore Rice Mill, Raymond was allowed to sell seed rice and soybean seed out of the warehouse. His business soon grew into Ray’s Seed and Fertilizer.

In 1968, Hensgens and Nolan Guillot formed G&H Seed Co., Inc. After three years of successful business, he acquired Nolan’s interest and the business was moved to its current location.

Over the next 40 years, Raymond’s, and Kitty’s, hard work paid off as G&H Seed Co., Inc., grew to a leading agricultural service oriented business with locations throughout Southwest Louisiana.

He was instrumental in initiating the handling of bulk seed and fertilizer and was the first to offer new and improved seed to area farmers.

He worked closely with the Louisiana Commissioner of Agriculture to write and implement laws that directly affected farmers. Raymond became an advisor to many people throughout the rice industry. Through it all, his style of doing business never changed.

As busy as he was with his business, Raymond still managed to find time to give back to the community and industry that he loved.

He proudly honored his German heritage every year at Germanfest. An avid supporter of the Notre Dame Pioneers, his cry of “Stand up for the kickoff” is etched in the hearts of all Notre Dame fans.

One final tribute to Raymond and Kitty Hensgens will take place next month. They will be honored by the Community Foundation of Acadiana as this year’s Leaders in Philanthropy for Acadia Parish.

But his crowning achievement was Hensgens Park, the baseball fields built on land donated by Raymond and Kitty.

He is survived by his beloved wife of 62 years, the former Catherine “Kitty” Schneider; one daughter, Jennifer Mixon and husband James of Bunkie; and three sons, Wayne Hensgens and wife Debbie of Crowley; Michael Hensgens and his fiancée, Cathy Bergeaux, of Lafayette; and, Mark Hensgens of New Orleans; his sister, Alberta Lyons and husband Marcy; his brothers-in-law, Henry Leonards and Ray Schneider and wife Pat; and his sisters-in-law, Sarah Hensgens and Lula Hensgens.

He was preceded in death by his parents, Christian Joseph Hensgens and Elizabeth Thevis Hensgens, both of Mowata; one son, Baby Raymond; his brothers, Leonard “Lennie” Hensgens and Lawrence Hensgens; and, his sisters, Germaine Hensgens Schneider and Wilma Hensgens Leonards.

In addition, he leaves behind his extended family at G&H Seed and Quality Equipment.

Special thanks are due to his caregivers, Janelle St. Andre, Pauline Handy, Sharon Mott, Sylvia Monceaux and Tamara Winbush, as well as Dr. Mulraj Katira.

Arrangements are being handled by Geesey-Ferguson Funeral Home in Crowley.

Visitation begins Wednesday from 3:30 p.m. until 9 p.m., and continues Thursday from 9 a.m. until the time of services. A rosary will be led by Msgr. Paul Metrejean and Msgr. Keith Derouen on Wednesday evening at 6:30.

Following the rosary, Sam Mixon will present a short eulogy. A German rosary will also be recited on Thursday at 10 a.m.

The family asks in lieu of flowers that memorial contributions be made to any Acadia Parish Catholic school or church, St. Jude Children’s Research Hospital, the American Heart Association or the Alzheimer’s Association.