Fiery collision claims 2 lives on I-10 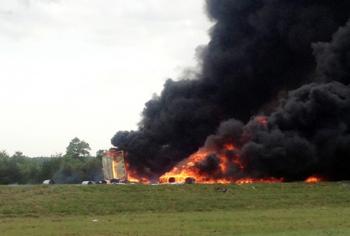 Howell "Howie" Dennis is the news editor for The Crowley Post-Signal. He can be reached at howie.dennis@crowleytoday.com or 337-783-3450.

Two 18-wheelers collided head on in the eastbound lane of Interstate 10  claiming the lives of both drivers involved and bringing I-10 traffic to a halt for several hours.

Both trucks burst into flames upon impact sending a plume of black smoke into the air that could be seen for several miles. Following the collision, one of the trucks came to rest across the eastbound lanes of I-10 and the other off the right side of the roadway.

“I could see the smoke all the way in Egan,” said area resident Terry LaCombe.

The accident drew first responders from numerous agencies from around the parish. The standstill traffic the accident caused made it tough for some of them to get to the scene.

“We arrived 45 minutes later and the trucks were still engulfed in flames,” said Crowley fireman Jason Schmalz. “It took us another 30 minutes to put the fire out with the help of several other departments.”

The initial investigation into the accident revealed that an 18 wheeler traveling west on I-10 crossed the median, striking the 18-wheeler in the eastbound lane. The investigation remains ongoing.

The names of the victims had yet to be released as of this time. More information as it becomes available.