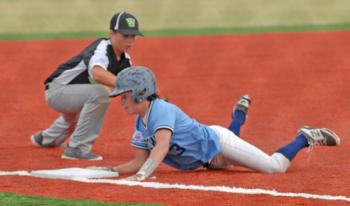 Crowley’s Ben Broussard slides safely into third base during the 2014 Bronco Super Regional Tournament in Youngsville this weekend. Broussard and the Americans defeated CSA, 11-0, Monday to in the tournament and earn a berth in the Zone Tournament that begins on July 23 in Burleson, Texas.

YOUNGSVILLE – The Crowley Americans had been virtually untouchable through the opening rounds of the 2014 Bronco Super Regional Tournament and that was the case again Monday in the championship game.
The Americans dominated CSA on the mound and at the plate in cruising to an 11-0 victory that sends them to the Zone Tournament in Burleson, Texas beginning on July 23.
It all started on the mound with Jack Faulk silencing CSA for four innings. He didn’t give up a single hit while striking out three.
Colby Wilson pitched the final inning and struck out the side in order.
“You know, our pitching staff has set the tone in every game and Jack Faulk just came out and threw an outstanding game tonight,” said Americans’ coach Benny Broussard.
With Faulk holding CSA in check, the Americans’ offense took over and banged out 14 hits on the night.
Faulk, Wilson, Steven Cormier, Ben Broussard, Barrett Harrington and Dakota Breaux each had two hits in the victory while Dominic Thibodeaux and Andrew Ashby each had one.
“We are really strong from top to bottom, hitting wise,” said Broussard. “There are really no weak links in our lineup. It starts with Steven Cormier, in the leadoff spot, who usually gets on base.  And it proceeds through the lineup. Again tonight, one through nine put the ball in play and hit it hard.”
The Americans got their offense going in the second inning when they pushed across three runs on four hits. Breaux and Faulk each singled to start the frame before Harrington delivered a two-run double. Wilson drove home the third run of the inning on a sacrifice bunt.
The locals added to their lead one inning later.
Broussard got things going with a single and Faulk followed with a one-out RBI double. Harrington added a run-scoring single before Thibodeaux doubled in a run to push the lead to 6-0.
The Americans put the game away in the bottom fourth inning with five more runs.
Breaux delivered a two-run double that plated Cormier and Ashby, who both singled. Brother Martin then drew a walk and Wilson came through with a two-run double with two outs. Wilson eventually crossed the plate on Gavin LeBlanc’s ground ball to shortstop that was misplayed.
The performance was typical of Americans’ efforts in postseason. In seven games, including Sectional and Super Regional tournaments, the team has yet to be tested. Of the seven games, only one went past five innings and none have gone the full seven.
In 36 innings between the two tournaments, the Americans have scored in double figures in each game, while allowing just seven runs in 36 innings.
Overall, including four tuneup tournaments and the two All-Star tournaments, the Americans have outscored their opponents 332-30.
“We have been playing extremely well all summer, but the bad thing is that we really haven’t been pressured,” said Broussard. “I know we will be pressured in Zone so hopefully we can stand up to that challenge.
“But the good thing is that our pitchers haven’t had to throw a lot of innings so we will be in good shape heading into Zone. We consider Colby (Wilson) our ace and he only pitched two innings total in the Super Regional. Our other pitchers who are just as good - Barrett Harrington, Jack Faulk, Dominic Thibodeaux, Gavin LeBlanc - all pitched well and allowed us to not have to use Colby that much, although he could have used the work.”