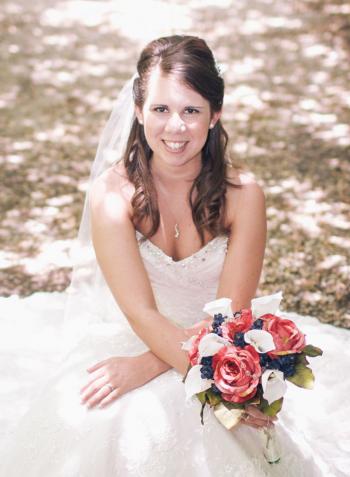 RAYNE - A Nuptial Mass was held on Friday, Sept. 27, 2013, at St. Joseph Roman Catholic Church uniting Michelle Bridget Simoneaux and Cory Paul Arabie in marriage.The bride is the daughter of Greg and Jennifer Simoneaux of Rayne. Her grandparents are Jerome and Hilda Simoneaux, and Marceline and Alfred Zaunbrecher, Sr., all of Rayne. She is a 2006 graduate of Notre Dame High School of Acadia Parish, attained her bachelor’s degree in 2010 from The University of Louisiana at Lafayette, and is employed by Old Navy in Lafayette.The groom is the son of Gregory and Danette Arabie of Rayne. His grandparents are Millard and Ruby Comeaux of Rayne, Nellie Arabie of Indian Bayou and the late John Arabie. He is a 2007 graduate of Rayne High School and is a member of the United States Navy where he serves as a missile technician.The 7 p.m. ceremony was celebrated by Fr. Garrett Savoie, associate pastor.Scripture readers were Blake Comeaux, uncle of the groom, and Tracy DeLatte, sister of the bride. Gifts were offered by the couple’s godparents.Musical selections were provided by Chelsea Albarado, Desiree Latiolais and Nick Latiolais.On the arm of her father, the bride wore an attractive A-lined wedding gown featuring a sweetheart neckline and zipper over inner corset with a crystal button closure. Embellishments were noted along the edging of the neckline and dramatic V-back as the fitted bodice was designed with a waist-line gathering. The creation was completed with an all-over lace layer and cathedral-length train. Her headpiece was a simple hairpiece holding a finger-tip veil of sheer illusion. She carried a bridal bouquet of coral roses and white calla lilies with a touch of blue filler blooms.Traditional items selected by the bride for her wedding day included her grandmother’s rosary intertwinned in her bouquet as something old, her wedding dress was something new, her sister’s necklace served as something borrowed, and her shoes were something blue.Attending her sister as matron of honor was Rachel Smith, with bridesmaids including Tracy DeLatte, sister of the bride; Paige Larriviere, friend of the bride; and Brittany Arabie, sister of the groom. Junior bridesmaid was Shelbi Fontenot, friend of the bride.Bridal attendants each wore a strapless, knee-length dress of coral chiffon designed with a sweetheart neckline while carrying a bouquet of ivory roses accented with coral and navy blooms.Serving as flower girls were Haley Guidry and Isabella Boudreaux, cousins of the groom. Each wore an ivory, knee-length dress and carried ivory and coral daisies.Attending his brother as best man was Cody Arabie, with groomsmen including Drake Conques, cousin of the groom, and Brandon Richard and John Martin Davis, friends of the groom.Serving as ring bearer was Daniel DeLatte, nephew of the bride.Ushers were Jordan Comeaux and Ross Arabie, cousins of the groom, and Michael Simoneaux and Scott Simoneaux, brothers of the bride.Male attendants wore light gray tuxedoes with navy vest and tie and a single coral rose boutonniere.For her daughter’s wedding, Jennifer Zaunbrecher Simoneaux wore a sleeveless blue jersey dress featuring intricate beading on the straps and waist. The bodice was designed with en empire bodice and a cowled neckline to the back. She was also presented a single ivory rose with a navy ribbon trim.The groom’s mother, Danette Comeaux Arabie selected a  jersey navy blue dress with a portrait collar, three-quarter length sleeves with rhinestone trim, and a banded ruched waist from which flowed a taffeta skirt. She was presented a single ivory rose with a navy ribbon trim.Immediately following the wedding ceremony, the newlyweds were honored during a reception held at The Crossing at Mervine Kahn. The traditional setting was adorned with the color theme of coral and navy blue with floral bouquets found throughout the reception area against a simple, yet modern burlap background.Among the refreshments provided was the wedding cake, a three-tier, ivory confection of vanilla with cream cheese filling. It was detailed with blue ribbon and accented with roses and calla lilies. The cake was served by Judy Broussard, a friend.The groom’s cake was a double-layer, red velvet confection with cream cheese icing and a Bud Light theme. The cake was also served by Judy Broussard.The couple will reside in St. Marys, Georgia where the groom is presently stationed.Prior to the wedding, a rehearsal dinner was held Thursday, Sept. 26, at the Rayne Firemen’s Hall. The 6 p.m. social was hosted by the groom’s parents.