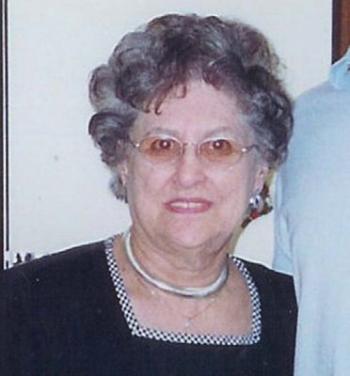 Memorial services will be held for Jewell Comeaux Hains who died after a brief illness on June 4, 2008 in New Orleans, Louisiana.

The Memorial services will be conducted by Father William Ruskoski, Pastor of St. Joseph’s Catholic Church at 2 p. m. on Saturday, June 7, 2008 in Rayne, Louisiana at Gossen Funeral Home.

Jewell, a native of Rayne, was born on November 27, 1926. She lived in Rayne all of her life except for the past few months when she moved to New Orleans to be near her loving daughter Wyndie. She was a graduate of Rayne High School in the class of 1943 and before she married she was a bookkeeper in her father’s business in Rayne.

She was a champion bridge player and taught bridge for many years. She loved her bridge playing friends and looked forward to playing with them several times a week. She was a member of the Catholic Daughters in Rayne.

She was predeceased by her parents, Thomas and Olite Faulk Comeaux, one brother Tommy Comeaux of Arlington Heights, Illinois, and former husband Jack Hains, Jr.

Arrangements have been entrusted to Gossen Funeral Home of Rayne.