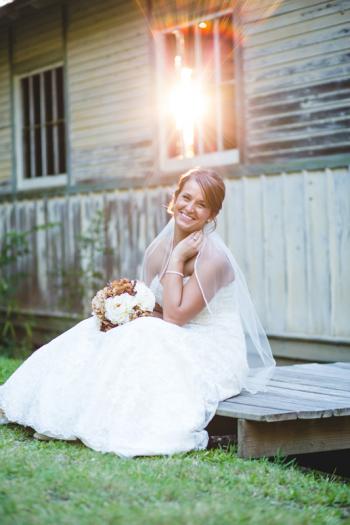 Madeline Clare LaHaye of Iota and Michael Gerard Legnion Jr, of Branch were united in holy matrimony on the evening of Friday, Oct. 9.
Fr. Jude Thierry officiated the 7 p.m. ceremony at St. Joseph Catholic Church in Iota.
The bride is the daughter of Sandra LaHaye of Iota and David LaHaye of Leonville. She is the granddaughter of the late Tester and Otis Primeaux of Crowley, and of Nettie and Judge Joseph LaHaye of Leonville.
Madeline is a graduate of Iota High School and Acadia Area Career College. She is presently employed by Dr. Kurt Rothermel, D.D.S., as a dental assistant
The prospective groom is the son of Donna and Michael Legnion Sr. of Branch. His grandparents are MaryAnne and Herman Reiners of Roberts Cove and the late Lillian and Bradley Legnion of Crowley.
He is a graduate of Iota High School and is presently self-employed as a farmer.
Escorted to the altar by her father, Madeline was gorgeous in a beaded Empire gown with allover lace embroidery on English net. Featuring a strapless sweetheart neckline and fitted bodice adorned with intricate bead work, the gown was finished in the back by a row of covered buttons and a chapel length train.
The bride paired her gown with an ivory veil embellished with pearls and bead work, and she carried a mixed bouquet of silk peonies in fall colors.
In keeping with tradition, the bride carried a handkerchief belonging to her late maternal grandmother as “something old” and wore lace ballet flats as “something new.” A blue Miraculous Medal pinned to the handkerchief was “something borrowed” and “something blue.”
The bride selected her sisters, Jennifer Frugè and Katie LaHaye, to serve as matron and maid of honor, respectively.
Jenny LaHaye, sister-in-law of the bride, Morgan Leger, niece of the bride, and Elizabeth Legnion, sister of the groom, served as bridesmaids.
The bridal attendants were clad in full length navy lace gowns defined at the waistlines with satin bows, and they carried bouquets of ivory silk peonies.
Jobn Reiners, cousin of the groom, served as best man.
Standing as groomsmen were Nicholas LaHaye, brother of the bride; Philip Reiners and Dylan Schexnider, cousins of the groom; and Johsua Lavergne, friend of the groom.
Pailyn Frugè, godchild of the bride, and Allison Reiners, godchild of the groom, shared the duties of flower girl.
The ring bearer was Abrum LaHaye, godchild of the bride.
For her daughter’s wedding, the mother of the bride, the former Sandra Primeaux, selected a full length champagne gown with an intricately beaded bodice.
The mother of the groom, the former Donna Reiners, selected a beaded navy tea length gown.
Both mothers carried mixed bouquets of fall flowers.
Music for the ceremony was provided by vocalist Naomi Broussard, who also played the piano and guitar, and trumpeter Seth Jones.
Selected scriptures were read by Madison Meche and Emily Navarre.
Offertory gifts were presented by Connor Frugè and Madilyn Reiners.
Following the wedding, guests congratulated the newlywed couple at a reception at La Belle Venue in Eunice.
The bride’s three-tiered cake was decorated with ivory buttercream icing and featured strawberry, Oreo and amaretto fillings.
Turtle cheesecake, strawberry cheesecake and classic cheesecake were served on behalf of the groom.
On the evening prior to the wedding, the parents of the groom hosted a rehearsal dinner at the St. Joseph Catholic Church hall.
Following a wedding trip to Fort Walton, Florida, the couple is residing in Crowley.