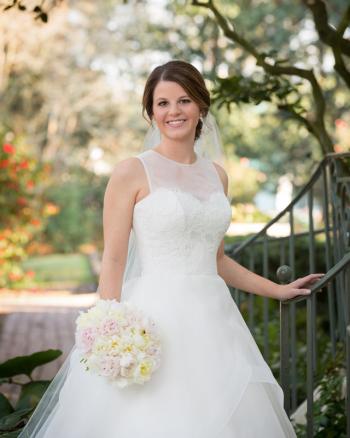 Couple wed in Nuptial Mass at Cathedral of St. John the Evangelist in Lafayette
LAFAYETTE

The bride is the daughter of Mr. and Mrs. David Whitcomb Andrus of Lafayette. Her mother is the former Michelle Jane Broadhurst of Lafayette. The groom is the son of Mr. and Mrs. William Edward Wied of Pearland, Texas. His mother is the former Noel Teresita Blakely of New Orleans. Mr. William Charles Broadhurst and the late Mary Jane Gates Romero and Mr. Dwight Wilbur Andrus Jr. and the late Nedra Ferne Reed Andrus are the grandparents of the bride. Mr. and Mrs. Noel Quentin Blakely and Mr. and Mrs. Robert Fred Wied are the grandparents of the groom.

In the vestibule of the cathedral, Laura Laine Ahrens and Mary Drew Ahrens, cousins of the bride, greeted guests with programs. Matthew John Laborde and Andreau Philip Trepagnier, close friends of the groom, served as ushers.

Accompanied by Bach’s “Brandenburg Concerto No. 1” as a prelude, the bride’s mother was escorted by her uncle, Stanley Osterland Gates, while the groom escorted his mother to their respective family pews.

The bridal attendants wore floor length dresses in mist gray, made of the finest, lightest tulle, customized in wear by each attendant. They carried bouquets of pink ranunculus, garden roses and anemones tied with satin ribbon. The flower girls wore ivory organza tea length dresses with blush pink sashes. They held wedding pomanders made of pink flowers tied with satin ribbon and suspended by a strand of pearls. The ring bearer wore a cream linen short set and carried a petit point pillow handworked by his maternal grandmother.

The gentlemen of the wedding party wore black peak-lapelled tailcoats with matching formal trousers and boutonnieres of stephanotis.

“Fireworks Overture” by Handel heralded the bride’s entrance on the arm of her father. The bride wore a custom gown of her own design. The sleeveless, high-necked bodice featured an illusion yoke of fine tulle above a sweetheart silhouette detailed with Alençon lace and was fastened in back by a row of small silk-covered buttons. From the natural waist, accented with a crystal embellished satin belt, fell a full skirt composed of multiple tissue-thin layers of tulle and silk organza of various lengths. She wore her Andrus great-grandmother’s aquamarine and diamond ring as her something blue. A cathedral length veil completed her look. In her shoe was an antique sixpence, a gift from her maternal grandmother. She carried a bouquet of tightly arranged peonies in various shades of pink and white secured with satin ribbon. Entwined in the flowers was a strand of pearls, a gift from her paternal grandmother.

Following the celebrant’s welcome and opening prayers, readings were offered by Meredith Jane Domengeaux and Kayli Jane Robichaux, close friends of the bride.

A reception immediately followed at the Alumni House at the University of Louisiana at Lafayette.

The evening preceding the ceremony, a rehearsal dinner, hosted by the groom’s parents, was held at Café Vermilionville.

Following a honeymoon in Bora Bora in the French Polynesian Islands, the bride and groom will be at home in Houston, Texas.